It appears that certain members of Congress are getting involved in the ABC News-Jeffrey Epstein story shutdown issue, and demand to know ABC News’ editorial process.

House Minority Leader Kevin McCarthy sent a letter Sunday to ABC News president James Goldston over the weekend, asking for answers surrounding allegations that the network spiked a report on the late billionaire financier and pedophile Jeffrey Epstein 4 years ago.

McCarthy was the most notable name on the letter, and Republican congressmen Mike McCaul of Texas and Doug Collins of Georgia also had their signatures on it.

Megyn Kelly has been all-in on this news since it broke on Nov. 5. She was first to report that the Republicans had sent the letter to ABC.

According to Kelly, the House Minority Leader wants ABC to provide the Robach interview, understand what facts led to decision not to run it, who was involved, what “outside forces” influenced the call, and what evidence did Robach have, and did ABC News ever alert authorities regarding Epstein.

Then, there’s McCarthy’s accusation that ABC could have been “endangering minors” by its decision not to run the story. Yikes.

MK EXCLUSIVE: House Min. Leader Kevin McCarthy accuses ABC of endangering minors by spiking Epstein story in 2015: “ABC News’ enabling of Mr. Epstein [raises]…the possibility that any number of minors could have been spared from human trafficking over the past three years.”

Here’s the letter, obtained by Kelly. 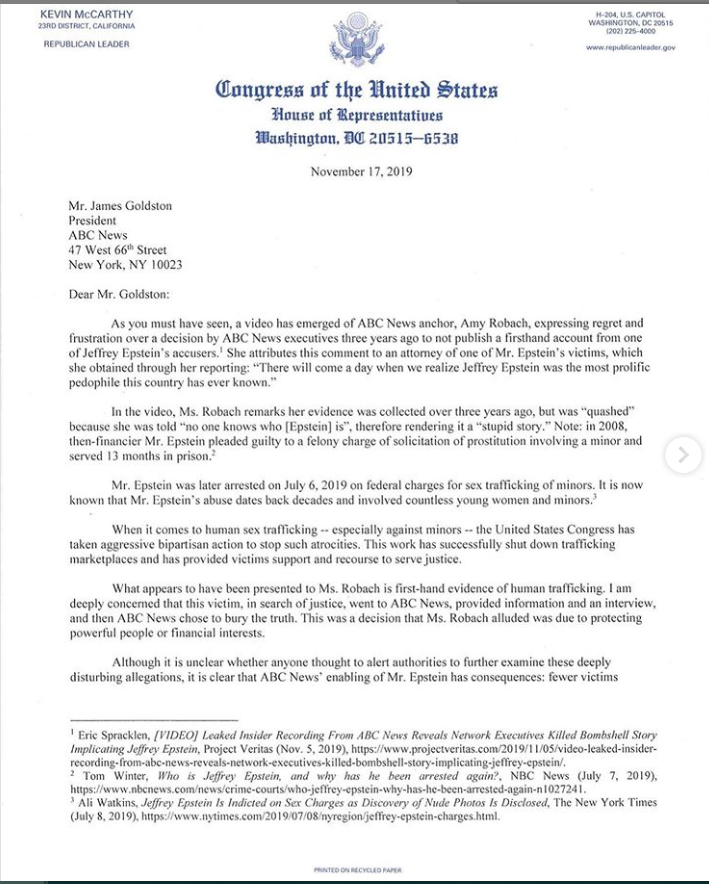 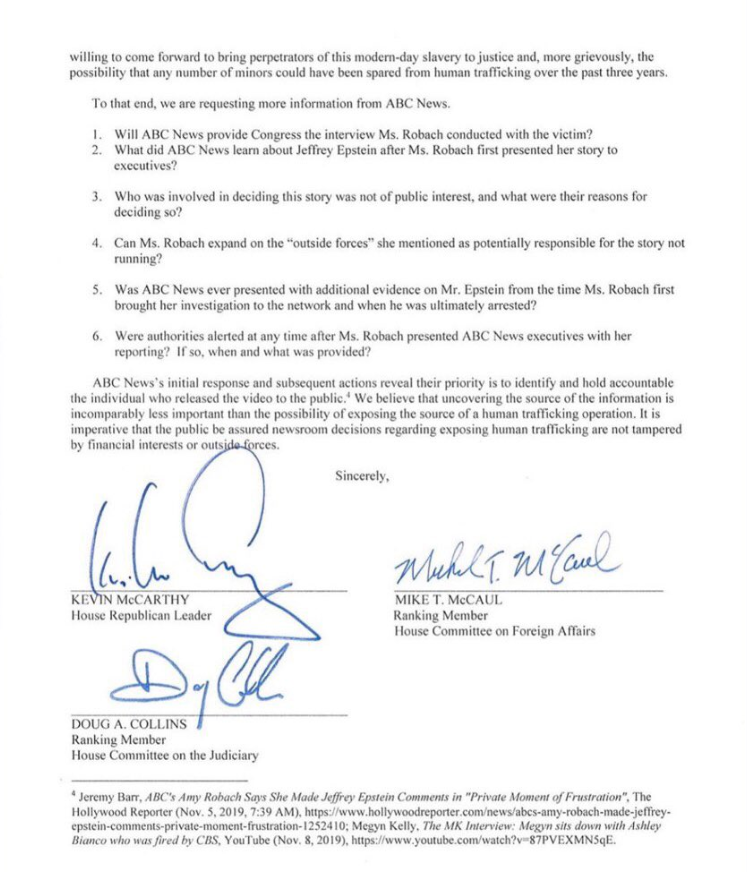 ABC News was widely criticized after a video leaked to the right wing media watchdog Project Veritas released hot mic footage of GMA and 20/20 anchor Amy Robach on Nov. 5 complaining that the network killed her interview with Epstein accuser Virginia Roberts. Robach remarked that Buckingham Palace threatened ABC News after finding out Prince Andrew was a part of the story and added that she “had all of” the reporting years ago.

“I’ve had this interview with Virginia [Roberts],” Robach is seen explaining of the alleged Epstein victim. “We would not put it on the air. I was told ‘Who’s Jeffrey Epstein? No one knows who that is. This is a stupid story.’”

Robach added: “The Palace found out that we had her whole allegations about Prince Andrew and threatened us a million different ways. I had it all three years ago.”

Interestingly enough, Good Morning America earlier today reported on the Prince Andrew BBC interview concerning his friendship with Epstein. However, GMA did not address its network’s own history when it came to this story.

ABC News allegedly contacted CBS after the leaked video, believing that a person who had access to the video was working at the outlet. CBS would later fire former ABC News “crash” producer Ashley Bianco, who previously told Kelly in an interview that she had started at CBS News just four days earlier, after ABC executives supposedly informed CBS of the situation.

Bianco told Kelly that she made the clip, but did not leak it.

“ABC News’s initial response and subsequent actions reveal their priority is to identify and hold accountable the individual who released the video to the public,” the letter states. “We believe that uncovering the source of the information is incomparably less important than the possibility of exposing the source of a human trafficking operation.”

After the footage leaked, Robach walked back her comments and said that ABC News did not have “sufficient evidence” to air the interview. ABC News put out a similar statement.

It remains to be seen if the Republican congressmen actually have a case against ABC News. Congress tried to go after CBS in 1971 for something similar, and failed.

McCarthy writes letter making demands on ABC about it editorial process @megynkelly scoops (!). He might want to read his history, when Congress tried this in 1971 and had to back off its cravenly unconstitutional request https://t.co/9z2hpp3r2Y https://t.co/yk0C1EEDnt

From that story: “But neither their critical judgment nor their curiosity empowers members of Congress to compel a network by threat of contempt prosecution to turn over its materials. That would be as obvious and as unconstitutional as requiring a magazine to make available its unedited manuscripts.”