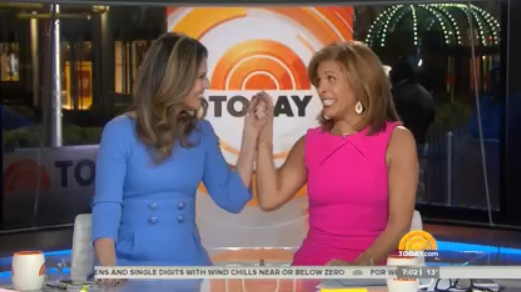 The first question we asked as part of the 2018 TVNewser Challenge last week was: “Who should become the next permanent Today show co-anchor?” Out of the six options listed, the overwhelming majority of you voted for Hoda Kotb. Well, you guys are good because this morning, Kotb was named permanent co-anchor of the iconic NBC morning show, sitting next to Savannah Guthrie. This will be the first all-female anchor duo in the show’s history.

As part of the longtime TV newser’s new duties at the network, Kotb will continue hosting the 10 a.m. hour of Today (which she has co-hosted with Kathie Lee Gifford since 2008), in addition to the 7 and 8 a.m. hours.

NBC News chairman Andy Lack announced the news this morning in a note to staff:

In a few minutes the TODAY Show will begin, and as it has for sixty-five years, will kick start the day for millions of Americans.

But this morning when the announcer’s voice introduces the show something will be a little different.

I’m proud to share the news with you that Hoda Kotb will become co-anchor of TODAY, joining the inimitable Savannah Guthrie. Our new anchor team will officially make their on-air debut this morning.

Over the past several weeks, Hoda has seamlessly stepped into the co-anchor role alongside Savannah, and the two have quickly hit the ground running. They have an undeniable connection with each other and most importantly, with viewers, a hallmark of TODAY.
Hoda is, in a word, remarkable. She has the rare ability to share authentic and heartfelt moments in even the most difficult news circumstances. It’s a tribute to her wide range and her innate curiosity.

Savannah, in her five years co-anchoring TODAY, has proven to be one of the best and most uncompromising interviewers in the business. Her unique credibility spans politics and pop culture and everything in between. On top of all that, we’ve been lucky enough to watch and delight in her joy as she has built her own family, all while becoming the center of TODAY’s. She’s been a rock for our organization in tough times, and we are grateful.

Another trademark of TODAY is the strength and experience of its team. Al Roker, Carson Daly, Kathie Lee Gifford, Willie Geist, Craig Melvin, Sheinelle Jones, Dylan Dreyer and Jenna Bush Hager have all consistently moved forward during this transition with thoughtfulness and dedication. We are fortunate to have such a deep bench of extraordinary hosts and journalists.

Below is the full announcement that will go out to press shortly. Please join me in congratulating Hoda and Savannah and everyone at TODAY.

It’s also worth noting that Today has won the morning show ratings race each week in the post-Matt Lauer era, which began Nov. 29, 2017. Kotb has been the person seated next to Guthrie for that entire time.

Kotb’s time at NBC News dates back to 1998, when she joined as a Dateline correspondent, and over her TV news career, Kotb has won multiple Emmys, a Gracie award and an Edward R. Murrow award. She also hosts The Hoda Show on SiriusXM.

Like many national TV newsers, Kotb began her TV news career on the local level, including a stint anchoring and reporting for WWL-TV, the highly-rated CBS affiliate in New Orleans from 1992 – 1998.