NEXT:Megyn Kelly Does Her Best Shania Twain Impression During Halloween on the Plaza
PREVIOUS:Morning Show Ratings: Week of October 23 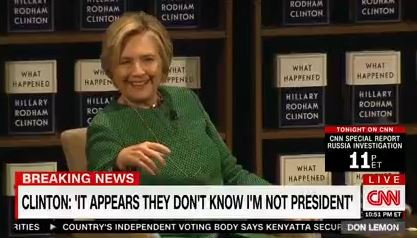 At an event in Chicago last night, where she was pushing her book, What Happened, Hillary Clinton took a swipe at Fox News, saying that the network is covering her so much, “It appears they don’t know I’m not president.”

Meanwhile, over on Fox News, 5 minutes into his show-opening monologue, Sean Hannity mistakenly referred to Hillary as President Clinton.

Back in Chicago, as noted by CNN last night, Secretary Clinton said, “All the networks, except Fox, are reporting about what’s going on. And Fox is peddling these stories about me. And I said the other day, ‘You know it they don’t know I’m not president.'” WATCH: