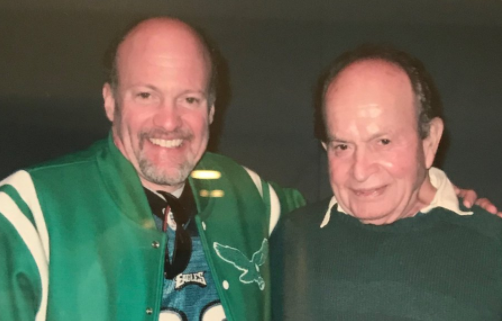 Many TV newsers and passionate Mad Money viewers know Jim Cramer is a huge Philadelphia Eagles fan. He’s made no secret of his love for the franchise during the program.

And working for the company that is carrying the Big Game has its perks. CNBC is sending Cramer to Minneapolis later this week for Super Bowl LII. The trip will be part fun, but also part business, as Cramer is hosting Mad Money from Minneapolis today.

We caught up with Cramer before he left for Minnesota and got his Super Bowl prediction.

TVNewser: There are a handful of publicly traded companies headquartered in Minnesota, 3M, Medtronic, General Mills. What would be your stock pick of those big companies?

Cramer: I think 3M is one of THE greatest companies on earth. My dad used to rep their stuff in Philly. They are monster good and an R&D powerhouse.

If the Patriots were publicly traded, would you have a buy rating on them?

Yes, the past couple days have been rough, but the markets have been setting records in 2018. Should President Trump receive the lion’s share of credit? Is it more the Fed? Or the Republican-controlled Congress?

I think he should get a huge amount of the credit because he has an almost radically pro-business agenda. The Republican Congress not so much as it was focused on repeal and replace and failed. Fed’s been good for a long time but this last huge move is on Trump.

I’m aware you’re a huge Eagles fan. Give us a brief synopsis of what you think will happen Sunday night, capped off by a final score prediction.

I think the Pats get ahead of us 14 to nothing. We then get it to 14 to 3; and they run it to 17 to 3 at the end of the half. We come out and we score a TD from an interception and an TD from a perfect pass to [Alshon] Jeffrey in the corner and then we score a field goal to win it.

More from Cramer, when we caught up with him for My First Big Break as he told us about the time Roone Arledge called him “the John Madden of Wall Street.”

For Pop and the generation that wanted this so badly : @Eagles pic.twitter.com/yswGia8d4I