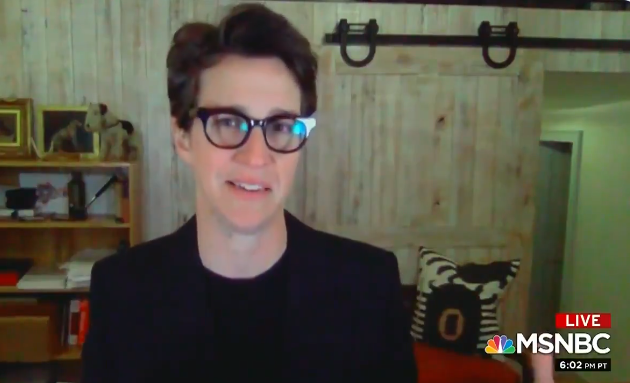 We reported on Nov. 6 that Rachel Maddow was leaving MSNBC (temporarily), and going into quarantine after coming into close contact with a Covid-19 positive case.

Maddow returned to her program tonight, and she talked about her absence.

For those wondering why Maddow didn’t just broadcast from home during her quarantine, she explained why in a moving 7-minute opening monologue: Her longtime partner Susan Mikula tested positive for Covid-19, and her symptoms were quite severe. Thankfully, Maddow said, she is on the mend; but it seemed touch and go early on. “At one point we really thought that there was a possibility that it might kill her,” she said.

Maddow, herself, has consistently tested negative during her quarantine and has had to care for Mikula, while remaining a safe distance away.

The segment was interesting for a number of reasons. In addition to Maddow’s words about her partner, the viewer got to see how the TV news sausage is made. While Maddow was talking about her absence, a beeping sound suddenly started going off in the background. She took off her mic and IFB, walked out of her shot, the sound eventually stopped, she quickly returned, put her equipment back on; walking the viewer through the steps and informing them that she was indeed going at this alone.

After talking about her partner, Maddow implored viewers to “recalibrate” acceptable risk as it pertains to the coronavirus. There’s no room for you in the hospital anymore,” she warned.

Here’s the entirety of the opening segment:

Watch: Rachel @Maddow reports that she’s been off the air for most of the past two weeks because her longtime partner Susan Mikula is sick with Covid-19 – so sick that “at one point we really thought that there was a possibility that it might kill her.” Mikula is recovering now. pic.twitter.com/MwN7cvQBRz