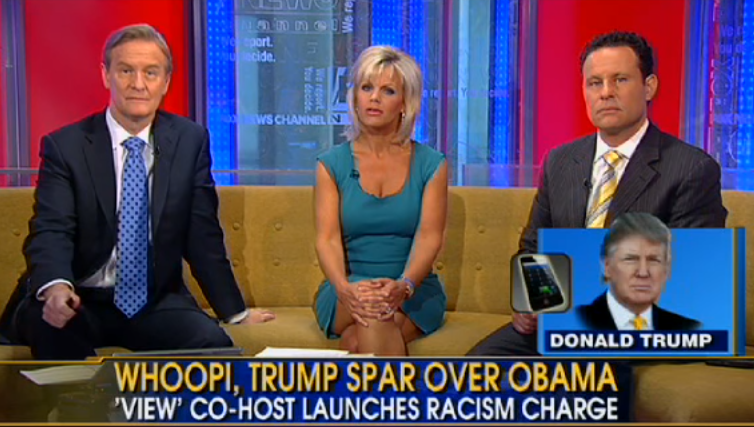 In light of last week’s report that former Fox News co-president Bill Shine is expected to take on an official “senior communications role” in the Trump White House, The New York Times’s Michael Grynbaum took an in-depth dive into the longtime Donald Trump-Fox News connection. It’s a connection that goes back to 2011 when the then-reality show host was given a regular slot on Fox & Friends.

Grynbaum writes why the late Fox News founder and chairman Roger Ailes decided to give Trump a weekly spot on the No. 1 morning show on cable:

Back in 2011, the decision to bring Mr. Trump into the “Fox & Friends” fold was a ratings-driven move: His occasional guest appearances had proved so popular that executives offered him a regular slot. Disdain for the Obama White House was a bonding point for the co-hosts and Mr. Trump, who shared his false theories about Mr. Obama’s place of birth.

Mr. Ailes, who died in 2017, saw the allure of his network’s new guest. Once, at a meeting with senior producers, according to a person in attendance, the executive said Mr. Trump appealed to Fox News viewers because he lived his life in a manner that many of them imagined they would, too—if they were rich.

Grynbaum also notes that Trump fit the profile of the typical Fox News viewer: As a white male in his 60s, “his unfussy patriotism and keen sense of aggrievement made him a natural fit for the Fox News aesthetic. And when it came time for President Trump to build out his administration, he knew where to turn.”

The Fox News influence has indeed extended from FNC’s Avenue of the Americas headquarters in New York to Washington. In addition to Shine, the current State Department spokeswoman Heather Nauert is a former Fox Newser. The Five co-host Kimberly Guilfoyle was reportedly under consideration for Trump White House spokesperson. Guilfoyle told us in a December 2016 interview that she would be “flattered and honored to be considered for any position where I could serve my country.” Guilfoyle now dates the president’s son, Donald Trump Jr., and is required by the network to disclose her ties when discussing the Trump organization.

Tucker Carlson and Laura Ingraham were reportedly press secretary candidates. Then there’s Jeanine Pirro, who according to Grynbaum, interviewed to be a deputy attorney general.

But Trump has his critics at the network, especially from the news division. For instance, Shepard Smith regularly criticizes the president’s rhetoric. Bret Baier was shut out for nearly a year and a half before Trump agreed to sit down with him after the Kim Jong-un summit in Singapore. Fox News Sunday host Chris Wallace has not interviewed the president since he became the 45th commander in chief. The Five co-host Juan Williams, a Democrat, often disagrees with Trump on-air.