It has been quite a year for CNBC’s Sara Eisen, co-anchoring Worldwide Exchange at 5 a.m., Squawk on the Street at 10 a.m., and interviewing CEOs, including an exclusive this past Thursday with Coca Cola’s James Quincey.

Eisen is doing all of this while pregnant – due with her first born, a boy, next month!

How is she doing, eight months in?

“I’m on air starting at 5 a.m., so I’ve been accustomed to waking up very early- 3:30 a.m.,” Eisen told TVNewser earlier this week. “And that means making sure I get to bed at a decent hour, before 9 p.m., and managing my rest. It’s gotten so much harder the past few months.”

“Mostly, I’ve earned a whole new world of respect for my fellow working women, who somehow manage all the challenges that come with being pregnant alongside their work,” Eisen continued. “From physical side effects like back pain or a stuffy nose to emotional swings, anxiety and tiredness, it’s tough to balance. I don’t want any of my peers or managers to expect I won’t be delivering 100% each day… but it takes incredible effort to fight through many things I’d previously taken for granted.”

Bloomberg TV’s U.S. programming chief Matthew Levine is the father. Eisen and Levine tied the knot in May of last year. The two business newsers met in 2011 when Eisen was at Bloomberg.

So with that in mind, we’re banking on this being a financially savvy boy, and perhaps we’ll see him on a business news network in 2047!

Eisen’s not so sure.

“My husband and I are accustomed to talking about current events, stories, tweets and all that over dinner, so he’ll definitely be exposed to it, but we have no grand plans to push our son into TV news,” said Eisen. “What we will try to instill is a passion for journalism and an appreciation for real news, which is as important as it’s even been… as it’s always been.” 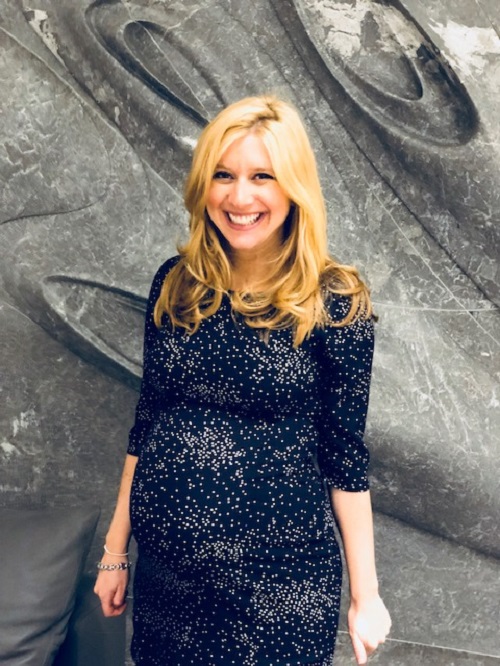