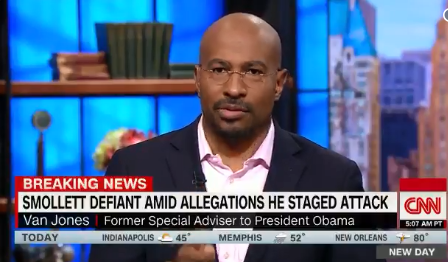 OK, we thought we’d let the dust settle just a tiny bit before diving into the Jussie Smollett saga.

After initially expressing support for the co-star of the Fox series Empire, a number of news personalities are now tearing into Smollett after he was taken into custody late Wednesday night/early Thursday morning in light of the new allegations that he filed a false police report claiming that two men wearing MAGA hats viciously attacked him last month in Chicago.

Filing a false police report results in a felony.

The Chicago PD allege that Smollett actually paid two brothers $3,500 to commit the fake hate crime against him in hopes that he would get a better salary from Fox; or as Chicago PD superintendent Eddie Johnson put it: “taking advantage of the pain and anger of racism to promote his career.”

So, the victim became the suspect. Smollett posted $100,000 bond on Thursday afternoon, and was ordered to surrender his passport.

“Absolute justice would be an apology to this city that he smeared, admitting what he did and then be man enough to offer what he should offer up in terms of resources put into this,” Johnson said; and earlier in the day, he remarked: “Why would anyone—especially an African-American man—use the symbolism of a noose to make false accusations? How could someone look at the hatred and suffering associated with that symbol and see an opportunity to manipulate that symbol to further his own public profile?”

Cable newsers broke into Johnson’s presser, as did ABC, which interrupted its daytime program.

21st Century Fox and Fox Entertainment decided to write Smollett off the final two episodes of the current season of Empire. It’s not known whether he’ll come back for future seasons.

Empire is one of the highest-rated shows on broadcast TV among adults 18-49.

Good Morning America co-anchor Robin Roberts, who conducted the first interview with Smollett after the reported attack, said on GMA earlier on Thursday that the developments were “a setback for race relations,” and added, “I cannot think of another case where there’s anger on so many sides, and you can understand why there would be.”

During that interview, which aired on Feb. 14, Smollett said one of the attackers said, “‘This MAGA country, n****r’ and he punched me in the face so I punched his a** back.”

He added: “It feels like if I had said it was a Muslim or a Mexican or someone black, I feel like the doubters would have supported me a lot much more,” Smollett said. “And that says a lot about the place where we are as a country right now.”

The many high-profile media personalities and congressmen and women who quickly jumped to Smollett’s defense and believed the story, now have different takes on Smollett’s actions.

CNN and Fox News have reported on the story a lot over the past few days. MSNBC has basically stayed away from it in prime time.

Below, a couple of hot takes from this morning and last night.

Friday on CNN New Day, panelist Tiffany Cross—co-founder and managing editor of a publication named The Beat DC—said the following:

“This is an actor who was feigning this attack, trying to get more money for his salary. That’s a separate conversation from what’s happening in society at large and the divide is happening in this country with as John [Avlon] said hate crimes being on the rise. They rose 30 percent again recently, 7 percent in 2018 alone, and most of these groups are white supremacists groups.”

“But if that is true, didn’t Jussie conflate the story? Didn’t he bring this forward and force people to have the conversation? And if it is true, didn’t he, in fact, attempt to paint MAGA supporters as these racist and homophobic people?”

Cross said she respectfully disagreed with Turner, and said “MAGA supporters have painted themselves as that” (meaning they’re racists and homophobes).

“When you look at footage and hear what they say there is the honest to goodness truth and we have to be bold enough to call that out.”

“We can’t actually say sometimes my team is right, I think my team is right 99 perecent of the time but the 1 percent time we’re wrong, done. That doesn’t mean I’m for the MAGA crowd. No one’s been tougher on hate crimes and racism than me. But I’m also not going to be—I’m not going to let our movements for justice become tools for people who are up to no good.”

.@VanJones68 says the “worst” part of the Jussie Smollett case is “the truth that hate crimes are on the rise has now been completely obliterated by the potential that this is a whole hoax.” https://t.co/xvzUBD5pIN pic.twitter.com/nmxkdb6avE

How about on Fox News?

“I can’t believe I’m going to say this,” The Five co-host Greg Gutfeld said during Thursday’s broadcast. “I do believe that he is kind of a victim.”

This is entirely preventable. This could have been prevented if the media divorced itself from its activist sensibilities. Since [President Donald] Trump‘s been elected, they’ve been informed by an anti-Trump bias that makes [the attack Smollett claimed] plausible. He knew he could fool the media.

On his program Thursday night, Tucker Carlson went after Don Lemon when discussing the story.

Carlson came to the conclusion that Smollett filed the false police report and faked the attack because he expected more fame, money, respect and power from being a victim. Carlson said the plan was working until the hoax was revealed. He showed some clips, including from the Robin Roberts GMA interview, before saying:

“Well, before he claimed that white supremacists beat him up on the street, most people had never heard of Jussie Smollett,” said Carlson. “And after he became a victim everybody wanted to be his friend.”

(For whatever it’s worth, Empire, which airs on fellow 21CF property Fox Broadcasting, is one of the top-rated shows on broadcast TV among adults 18-49).

Carlson added, mockingly: “Here’s Don Lemon over on CNN bragging how he texts his new pal Jussie [Smollett] every single day. He has his cell number. That’s how close they are. Really tight!”

After the clip, he continued. “‘You can talk to me’, Don Lemon says, ‘because there aren’t a lot of us out there.’”

“Well here’s the translation,” said Carlson. “‘Us’ means people who have been oppressed in the way Jussie Smollett has been oppressed. Lemon is letting you know that he’s in that group too. Yes is he a highly paid news anchor with his own TV show. And yet, like Jussie Smollett, Don Lemon is a holy victim.”

Carlson discussed who the victims were in this crime, saying it is the people who the media and Smollett’s supporters “poured venom on for two weeks.”

“What about them? No mention of them,” he said. He added that “Don Lemon would very much like to keep up those attacks on those people. Attacking them allows him to feel oppressed.”

Below, video from conservative media outlet The Daily Caller of Carlson discussing the story. Daily Caller is an outlet Carlson co-founded, but is no longer involved with on a daily basis.

An hour after Tucker Carlson Tonight wrapped up, Don Lemon continued to discuss the story on his program. He said that if the Chicago PD is indeed correct in that Smollett faked his own hate crime, the saga is really distracting from the real victims of crime in Chicago, crime that merits more attention.