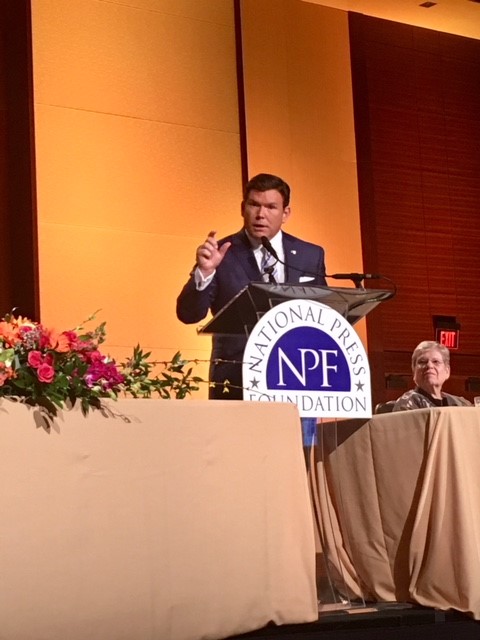 In addition to his brother, Tim, his wife and son, a number of Special Report staffers and other Fox Newsers were in attendance to see Baier receive the honor and give his acceptance remarks, including his ep Doug Rohrbeck, Fox News digital politics editor Chris Stirewalt, chief congressional correspondent Mike Emanuel, Capitol Hill producer Chad Pergram, and Washington-based correspondent Griff Jenkins.

“This truly is a big honor – I’m humbled by it and the list of past recipients,” Baier told TVNewser. “At our best – journalists can shed light and can truly change the world.  In the face of increased attacks and skepticism, we need to push back – press for access and transparency, dig, and ask  tough questions- but we also need to listen to all sides – and listen first.  We have to stand together and support each other but, we also have to make sure we are presenting the facts for the audience so they can make their own decisions.  We need to make doubly sure we’re not trying to make the decisions for them.  I really love my job and I look forward to listening around the country and continuing to report during this fascinating time.”

The Special Report anchor received congratulations from TV newsers from across the news landscape, including a shout out from CNN’s Washington bureau chief Sam Feist.

Happy to join in honoring @BretBaier and other incredible journalists tonight at the @NatPress Foundation Awards in DC tonight. Congratulations! pic.twitter.com/O1ipg0xrYF