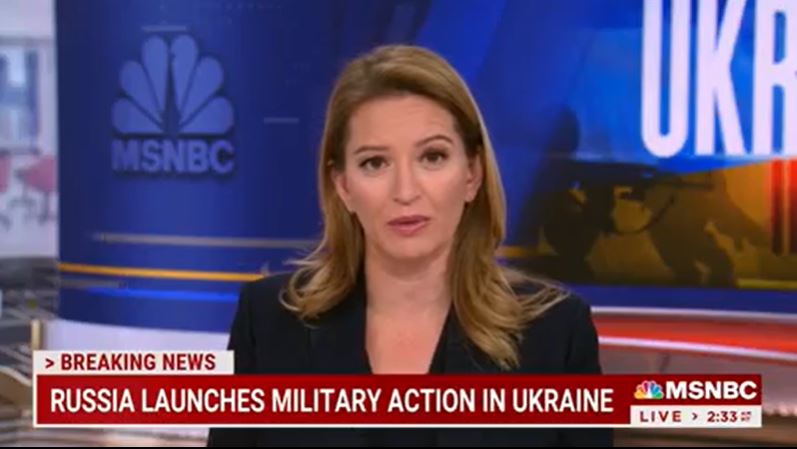 TV news outlets delivered live breaking news coverage of the Russian invasion into Ukraine late Wednesday—and will continue to do so on Thursday.

ABC News will offer special reports throughout the day on Thursday as news warrants.

Over on MSNBC, Rachel Maddow will return from hiatus tonight to cover the breaking news situation in Ukraine from 8-10 p.m. ET.

Over at Bloomberg, Surveillance extends till noon ET (with Tom Keene, Jonathan Ferro, Lisa Abramowicz). Bloomberg: Balance of Power is with David Westin in New York and Joe Mathieu in Washington. Bloomberg: The Close airs from 1-5 p.m. (starting an hour earlier than usual) with Romaine Bostick, Caroline Hyde and Kailey Leinz.

Hitting the rewind button to Wednesday, Anderson Cooper, who has been on paternal leave with his newborn for the past couple of weeks, returned to anchor AC 360. CNN’s chief international correspondent Clarissa Ward reported live from Kharkiv, Ukraine, close to the Russian border, and told Cooper that “this feels like a city—indeed, a country—that’s really just holding its breath.” Ward remarked that the shift in tone from Ukraine President Volodymyr Zelensky was especially notable.

After Cooper, Don Lemon took on anchor duties for CNN from 10 p.m.-1 a.m. ET. Lemon passed the baton to CNN International anchor and correspondent Michael Holmes, who anchored from the ground in Ukraine during the overnight hours, before Brianna Keilar took the baton at 5 a.m. ET.

Fox News correspondent Steve Harrigan reported from Ukraine in the early hours of Thursday, local time, telling Fox News @ Night’s Shannon Bream, “You know, I think in the short term, Ukraine has no chance at all. But in the long term, I think they have every chance in the world. It really depends how this war goes. But I remember a war nobody heard of 25 years ago in a place called Chechnya and the Russians boasted. They said we are going to take Chechnya, population 1 million in two hours. Ten years later, the Russians were still fighting in Chechnya. It is easy to take a city. It is hard to hold the city. The Russians can come in and take Kyiv. They can carry out regime change, they can decapitate the leadership here and whatever brutal form they choose. They can do that. But they can’t hold on. I think if you ask me my opinion, which I’m glad to give, if this is a major war, this is the downfall of Vladimir Putin. This is the downfall of his Russia, this is the downfall of an autocracy, because they can win in the short-term but they cannot win in the long term. Ukraine, Europe is not going to stand for it.”

“We are hearing explosions in the capital of Kyiv right now. This is that coordinated attack for weeks western intelligence analysts warned could take place. The explosions in the Ukrainian capital started shortly after reports were coming in of explosions in the east and after those what appeared to be taped remarks by Russian President Putin finished up in Moscow. One of the places in the eastern part of Ukraine that we know took a direct hit during these initial air strikes was a small town Kramatorsk. It was a town that we actually landed in over the weekend when we were on the front lines with Ukrainian troops. There is a lot of military equipment there and it was used as a base in this part of, very close to the front line. The fact though that there are explosions in the Ukrainian capital escalates this event and this Russian invasion into Ukraine to a level that analysts feared could expand to a much larger conflict between the two sides.”

Back over on broadcast news, CBS News foreign correspondent Charlie D’Agata was live on CBS’ special report in primetime, anchored by Norah O’Donnell, when explosions broke out behind him in the city of Kyiv. D’Agata said he could hear fighter jets and loud explosions overhead, as air and missile attacks have been reported across much of Ukraine. He reported that one official told him more than 40 Ukrainian soldiers are dead.

Live on the ground in Kyiv, @charliecbs says he can hear fighter jets and loud explosions overhead, as air and missile attacks have been reported across much of Ukraine.

One official said more than 40 Ukrainian soldiers are dead. pic.twitter.com/E3LwaEYwKv

Holly Williams reported for CBS from Kharkiv, Ukraine, and said there are “grave fears that this could end up being the biggest land war in Europe since World War II,” after the city was rocked by possibly “dozens” of “loud explosions” overnight.

Reporting from the ground in Kharkiv, Ukraine, @HollyMAWilliams says there are “grave fears that this could end up being the biggest land war in Europe since World War II,” after the city was rocked by possibly “dozens” of “loud explosions” overnight. pic.twitter.com/SWD485PiaU 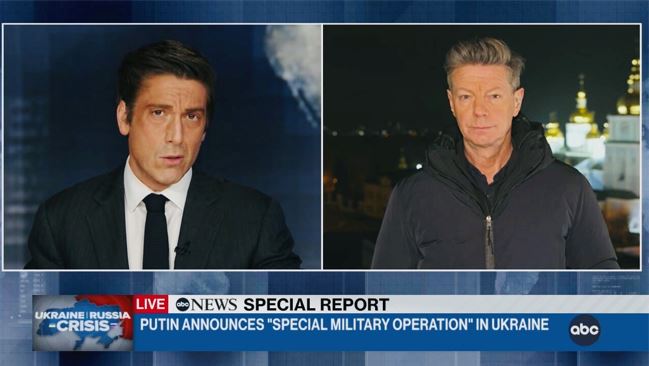