NEXT:Fox News Anchor Eric Shawn Asks Viewers to Stay Home: 'There Are So Many Suffering. It Is Personal. It Is Crushing'
PREVIOUS:Friday, April 3 Scoreboard: Tucker Carlson Led Fox to a Prime-Time Win, CNN Was No. 1 at 9, 10 and 11 p.m. in Demo 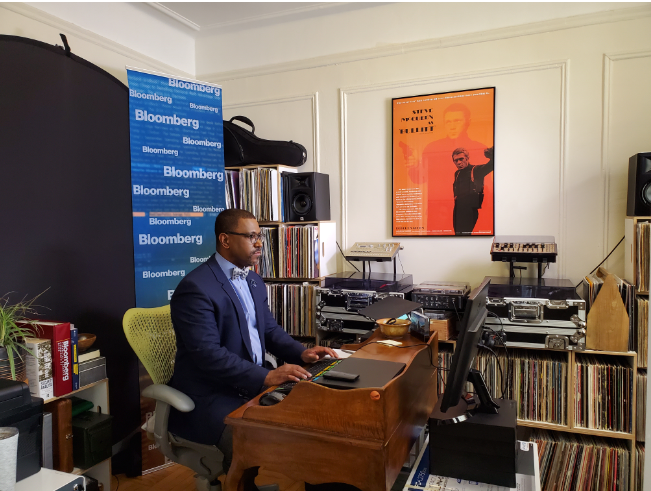 We asked the television news industry last week about upgrades they’ve made to their respective home studios since they started broadcasting from home last month.

What equipment have you received that you didn’t have at the outset? Is broadcasting from home getting easier? Harder?

Newsers from CBS, Bloomberg, Telemundo and Fox News responded to our call, and here’s what they had to say:

“While working from home I’m using an iPod tripod, a ring light and Skype to connect to CBSN for our daily coverage of the presidential coronavirus taskforce,” said CBS News political correspondent Ed O’Keefe.

The CBS Newser gave a shout-out to his wife, who works for the American Society of Interior Designers, for her active involvement in his home-studio set design.

“Having seen our setup and how it compares to what other newsers are doing from home, she took it upon herself to freshen up the book selection and offered up one of our many plants,” said O’Keefe. “The plant is a huge help.”

He added: “We’ve rearranged a corner of the bedroom to serve as the backdrop. One of the bigger challenges? Keeping the 1- and 4-year old entertained in the other rooms while broadcasting live.”

Here’s O’Keefe on CBS This Morning on Friday, plant in the background:

A patchwork of stay-at-home orders around the country has created dramatic differences in the way we live. The @nytimes used anonymous cell phone data to create a map to show how the orders affect our travel patterns.
@edokeefe reports on the contrast from state to state. pic.twitter.com/v9kzw97XLy

Bloomberg Television correspondent and What’d You Miss co-host Romaine Bostick started working from home last Monday, and has received sage advice from Bloomberg colleague Scarlet Fu about how to set up a home studio, better organize his Bloomberg Terminal screens for home use, and how to better manage workflow.

The space I’m in is a small office that my family used as a music room. It’s about 12×10 feet and was already crammed with a piano, guitars, records, mixers and tons of other music and audio equipment.”

I moved a small desk onto one side of the room where the piano is and put a black-colored backdrop behind me on a large tripod to add some texture for the camera and a separate Bloomberg banner (always be on brand!) The cameras and lights were set up on the opposite side in front of the only window in the room.

Thankfully it’s one of the quietest spaces in my home, considering all of the family is working/schooling from home.

To be able to keep tabs on breaking news headlines and up-to-the-second market data, Bostick has now added a 27-0inch monitor. He doesn’t have a teleprompter, so he purchased a laser printer to print out scripts quickly.

“My wife insisted I put a plant in the room to add some life to the TV shot,” he added, which seems to be a theme for the male newsers. “Just out of view of the camera I have two laptops running. One company issued that powers the Bloomberg terminal and the other my own that I use to take notes and review any reports and materials from analysts, investors and other guests appearing on the program,” said Bostick.

What do other Bloomberg newsers think about this new normal?

“It’s been remarkably easy to do my live, 4-hour radio and YouTube show from home,” said Bloomberg Businessweek Radio/TV anchor Carol Massar, who started broadcasting from her home in New Jersey on March 18. “Couple of laptops, a desk, a small 5” by 6” Comrex box (don’t ask me what it is) and a cable that runs from the study, thru the hall to our den, where it plugs into our gigabit, direct fiber connection (again, don’t ask me.) Voila.”

Massar added: “My co-host, Jason Kelly is doing the same thing, about 38 miles/1 hour/1 state away, in his home. And yet it feels like we’re together. Video conferencing helps a lot and we have definitely developed our own work-from-home sign language.”

Massar said broadcasting from home is definitely getting easier: “I’ve got a room in my home that is now known as mom’s radio studio, which everyone respects except Scout, our Irish Terrier,” she said. “Initially, laptop screen management was a bit tricky. One screen shows the Bloomberg (of course!), Tweetdeck, IB chat, commercial log, interview notes and show notes. On the second screen is the Bloomberg radio clock, my remote office desktop and our video conferencing app. It’s a lot. Now it’s organized and I can flip around without accidentally closing something just as I need it live, on air.” 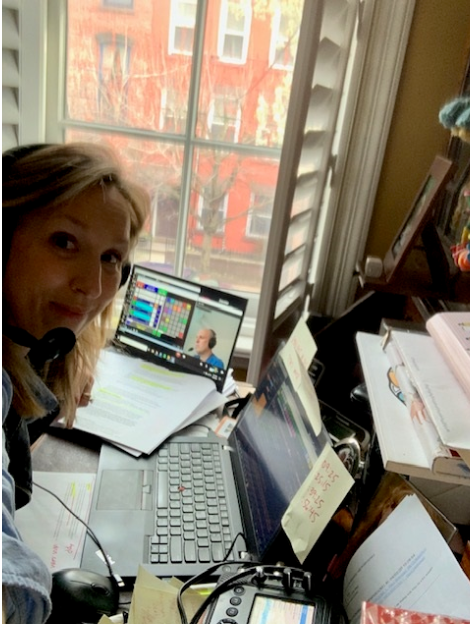 Since Monday, March 16, Massar’s colleague Jason Kelly has been broadcasting Bloomberg’s daily Businessweek radio show as well as taping interviews in other windows, and putting together the weekend radio show from his 2-year-old’s bedroom.

What upgrades has Kelly made to his makeshift home studio? “We did make the decision at our house to up our Internet speed, as my wife has a home office and we have a couple teens and a 2 year old whose streaming demands are, shall we say, robust.”

On the equipment front, Kelly said he had most of what he needed, with the exception of a wireless mouse. “Also I had to make sure I tricked out my desk with an Ember charger,” he added. “I love my Ember mug. I also employ a white noise machine just to keep out any household noise that may happen during the afternoon.” 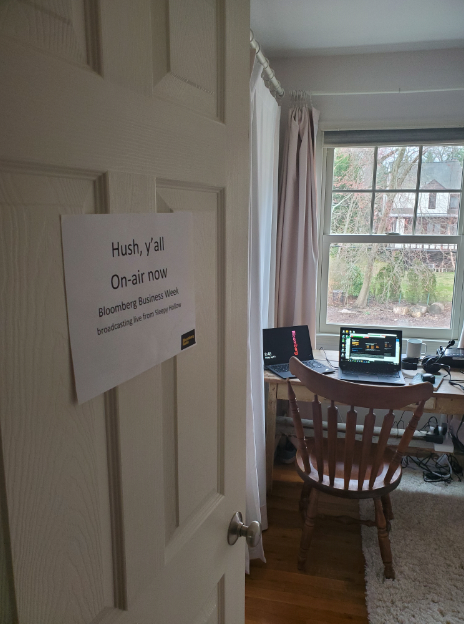 “All of our reporters are equipped with boom mics, cellphones and laptops to guarantee the best quality available to use Skype for interviews,” said Garcia. “We have upgraded Avid Cloud and acquired Horizon and Teradici software that allows editors to connect remotely to their Avid workstations in Telemundo Center. I am using Microsoft Teams nonstop for meetings.”

According to Garcia, producing from home is harder, “because you lose the pulse of the newsroom, which is crucial in news. You have to deal with misunderstandings, crossed messages and people stressed at home.”

She added: “As a manager, you have to keep everyone cool under very difficult circumstances and be encouraging —all virtually. Communications are easier in person. But on the other hand it has been easier than I thought. My team has really responded to the challenges of covering this story.”

Fox News’ Martha MacCallum is anchoring her 7 p.m. show The Story from her New Jersey home, and says she’s getting into a groove.

“My home PC is now integrated with the show scripts and rundowns, so that’s great,” said MacCallum. “I can easily write and edit from here. We are all on the conference call and we have several rotating producers in New York, which is great and we are all thankful for that.”

When asked what equipment she now has that she didn’t have at the outset, MacCallum brought up a big screen monitor, eng camera and lights.

“I want it to be as close to New York as possible,” said MacCallum, referring to her studio at Fox News’ Manhattan headquarters. “There’s a small delay so the interaction with guests is not seamless, which is frustrating, but it’s pretty good. I’m amazed at what our technology/production folks at Fox News have pulled off. Our leadership, led by Suzanne Scott was way ahead of the curve. When they said they wanted to make sure we could all broadcast from home, I thought it was going a bit overboard. I was wrong. Grateful for their foresight.” 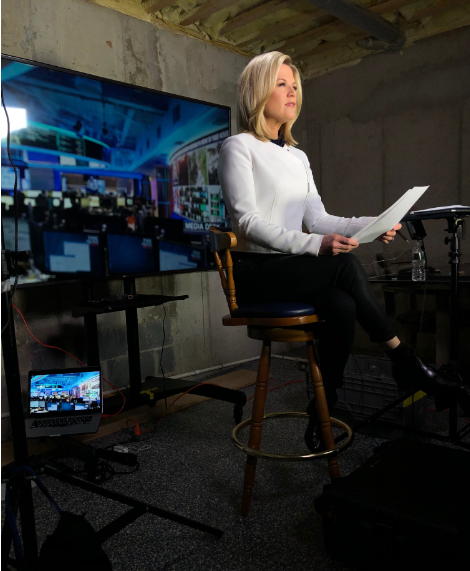