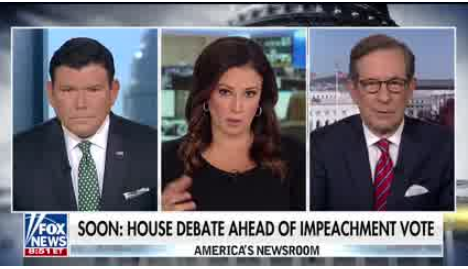 Broadcast and cable news is delivering in-depth coverage on what is a historic day in the history of this country: The House of Representatives’ vote to make Pres. Trump the 3rd U.S. president in history to be impeached.

CNN’s special coverage kicked off at 8 a.m. ET today, anchored by Wolf Blitzer and Jake Tapper, joined by Anderson Cooper and many other CNN political analysts. Tapper and Blitzer will be anchoring all day.

MSNBC’s Nicolle Wallace and Ari Melber are anchoring their network’s coverage all day.

No Judge Andrew Napolitano, who has been critical of Pres. Trump and the House Republicans in recent weeks.

Fox News coverage was supposed to start at 9 a.m. ET this morning, but kicked off at 8:45 instead.

“I was struck both last night and this morning how unremarkable today suddenly feels,” said Todd. “I say that because it is remarkable what is happening … and yet, it feels like … we are coming on the air dealing with a government shutdown threat, not impeachment.”

“This is a historic and grave day for our nation’s democracy because President Trump’s legacy will now include impeachment,” said O’Donnell. “He joins Bill Clinton, who was impeached lying under oath about sex. He joins Andrew Johnson, who was impeached for defying Congress on Reconstruction…Today’s vote comes one day short of when Clinton was impeached 21 years ago. It it is a stain on a presidency.”

Garrett added: “You can’t separate politics from this. You simply can’t. It has a quasi-judicial aspect to it. The politics is infused in this…This could have taken longer, the clock and charges that could unify the democratic caucus drove most of the process. That doesn’t mean it’s illegitimate. But you also have to acknowledge that politics and placement of this on the calendar were not incidental considerations.”