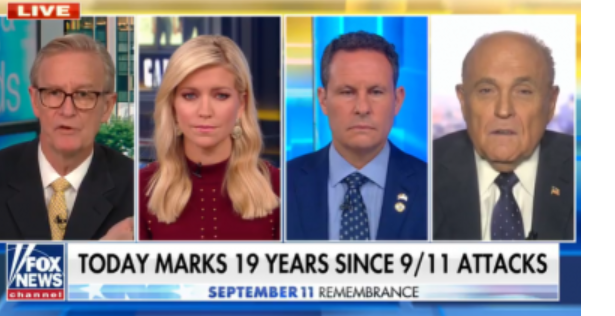 Television news is presenting live coverage of the 19th anniversary of the 9/11 attacks this morning from the National September 11 Memorial & Museum at the World Trade Center in New York.

This morning we pay tribute to all those who died on 9/11.https://t.co/1TFL2jvzBK 🇺🇸 #NeverForget pic.twitter.com/PVpOU6PIV1

All three broadcast networks carried the first moment of silence at 8:46 a.m. ET, when the first of two hijacked planes was flown into the north tower of the World Trade Center.

The first moment of silence is observed as commemoration ceremonies are now underway on the 19th anniversary of the 9/11 attacks. pic.twitter.com/1ZjU5PF2z0

For the first time, the annual commemoration ceremony at New York’s Ground Zero did not include a live reading of the victims’ names (the reading of the names was recorded).

New York’s local ABC, NBC and CBS stations as well as Spectrum News NY 1 continued to cover the commemoration ceremony and recorded reading of the names throughout the morning.

Joe Biden and VP Mike Pence greet each other at the National September 11 Memorial & Museum ceremony in NYC to remember and honor those killed in the terror attacks 19 years ago today.
⁠
📷 Amr Alfiky / The New York Times via Gettyhttps://t.co/ksSPVaLQK5 pic.twitter.com/Z0CPtlNlpA

A moment of silence was observed 19 years after the Sept. 11 terror attacks. Vice President Mike Pence and Democratic presidential nominee Joe Biden are at the 9/11 Memorial this morning. https://t.co/1hNjIzn2lD pic.twitter.com/WQWYefspF4

President Trump delivered remarks at the Flight 93 memorial in Shanksville, Pa., this morning:

“In their memory, we resolve to stand united as one American nation, to defend our freedoms, to uphold our values, to love our neighbors, to cherish our country, to care for our communities, to honor our heroes, and to never, ever forget.” pic.twitter.com/6eXOjB7wmb

I’m so grateful for the people I get to talk to today because they made it out, one rushing down 70 flights of stairs while pregnant, but, 19 years later, I remain devastated for the families, like the 12 in my New Jersey hometown, left without that privilege. #NeverForget pic.twitter.com/ZPnvCQu9z0

“It was just too much. What we were watching couldn’t be real. Our minds, our souls refused to believe … the enormity of it all. The shock, soon turning to sorrow.”

On the 19th anniversary of the 9/11 attacks, @HarrySmith honors those we lost, many of whom sacrificed their own lives to save others. pic.twitter.com/xkUwMHxbKF

A beautiful tribute to those we lost. Never forget. https://t.co/UntrXsof19

19 years ago, more than 2,700 people were killed at the World Trade Center, including firefighters & first responders. Now, more than a dozen recent FDNY academy graduates are children of fallen 9/11 heroes.

Meet 2 brothers who are following their father’s legacy. #NeverForget pic.twitter.com/2sWOGAcb1S

Fox & Friends traditionally delivers the most in-depth coverage of the annual 9/11 events of all the morning shows. The program aired the live memorial events in New York and moments of silence. Throughout the program, Steve Doocy, Ainsley Earhardt and Brian Kilmeade were joined by a series of guests, including former New York Mayor Rudy Giuliani (as has become tradition) and CEO of the Stephen Siller Tunnel to Towers Foundation Frank Siller, to share their experiences from 9/11. Siller was joined in lower Manhattan by Fox & Friends Weekend co-host and Pete Hegseth.

Additionally, the network’s live news banner outside of its New York headquarters featured each of the names of all 2,975 victims from that day in the 8 a.m. hour as the memorial services took place.

Chris Wallace provided his thoughts on that fateful day this morning on America’s Newsroom, saying it “feels like an open wound.”

Additionally, FBN’s Charlie Gasparino wrote an op-ed, titled 9/11 and the pandemic: A united and divided society. In it, he reflects on 9/11 and his own connection to what happened that day. He notes that, “It hit home to me because my old man help build the Twin Towers, and when I was a kid, he took me to see the nearly completed version.” He also thinks back on his time working across the street as a reporter at the Wall Street Journal, and how a doctor’s appointment that morning spared him from being at Ground Zero when the planes hit.

19 years ago today. Over 2,500 people killed, more than 6,000 people injured. Countless families ripped apart. A country forever changed. Remembering those we lost on 9/11, and keeping those they loved and who loved them in my thoughts and in my heart. I will always remember. pic.twitter.com/AjC8eIgrjQ