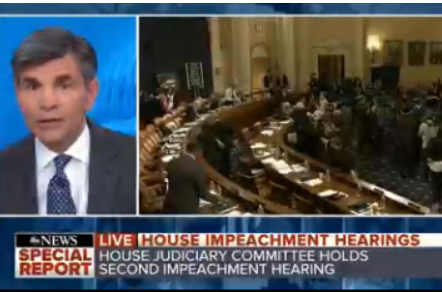 The House Judiciary Committee today is holding a second public hearing, where it will listen to testimony from Democratic lawyers laying out their case for Pres. Trump’s impeachment, and from Republican lawyers arguing against impeachment. This is an event which will set off an intense couple weeks in Washington, expected to end with a House floor vote on the impeachment charges only a few days before Christmas.

As they prepare to release articles of impeachment against Trump, perhaps this week, lawmakers are hearing attorneys from the House Intelligence and Judiciary committees lay out evidence from the Democrats’ Ukraine probe and argue their case that Pres. Trump abused the power of his office by pushing Ukraine to launch investigations that could benefit him politically.

Witnesses for today’s hearing include Democrats’ counsel Daniel Goldman and Barry Burke, as well as the Republicans’ counsel, Steve Castor.

Here’s how some of the networks are covering today’s proceedings.