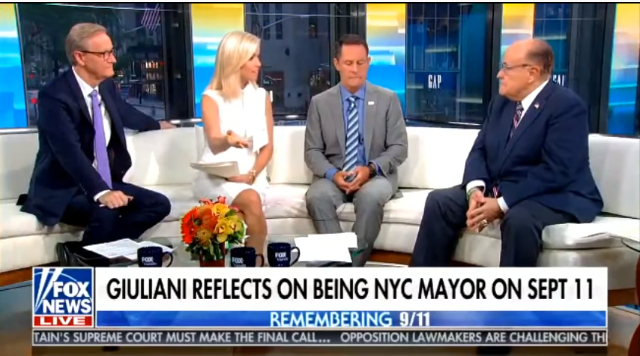 Television news is presenting live coverage of the 18th anniversary of the 9/11 attacks this morning.

All three broadcast networks are carrying the White House moment of silence at 8:46 a.m.ET, when the first of two hijacked planes was flown into the north tower of the World Trade Center.

Each is also presenting a special report at approximately 9:35 a.m. ET to cover the memorial service at the Pentagon, where President Trump is expected to make remarks.

Watch: The first moment of silence is observed on Sept. 11 as commemoration ceremonies are now underway on the 18th anniversary of the terrorist attacks. pic.twitter.com/u25BJUC2Y9

A moment of silence is held for the victims of 9/11 on the 18th anniversary of the attacks. #NeverForgethttps://t.co/2MbuJKJHVO pic.twitter.com/zDwHqP6dxF

CBS This Morning is airing a report from Adriana Diaz on the students of Stuyvesant High School, who were in class just blocks away when the first hijacked planes hit the World Trade Center. Diaz was a student at the school that morning and talks with classmates about the impact the attacks had on their lives in the years that followed.

To mark the 18th anniversary of 9/11, we’re hearing from former high school students who sat in classrooms just 3 blocks from the Twin Towers attack, including our own @adrianasdiaz. #NeverForget pic.twitter.com/sQN2kUVwxT

Of the cable news nets, Fox News has given the most attention to the remembrances of 9/11 including the solemn reading of the names at the National September 11 Memorial and Museum.

Fox & Friends anchors Steve Doocy and Brian Kilmeade were co-hosting the morning show 18 years ago today.  Fox & Friends ended their program early that day, about five minutes before 9  a.m. ET, and handed the reins off to Jon Scott, who was anchor of the 9 a.m. hour, back then was known as Fox News Live.

“We were preparing the 9 a.m. hour of Fox News Live, as we called it then,” Scott writes in a Fox News op-ed out today. “I was to interview the author of a new book about the death penalty, as well as a musician launching a comeback tour.”

Here’s Scott back on Sept. 11. Fellow Fox Newser Eric Shawn was on the scene.

Fast forward to this morning — New York mayor Rudy Giuliani was on this morning’s edition of Fox & Friends, as he has been in on recent Sept. 11’s.

FNC, like the local New York stations, showed the annual reading of the names in a split screen during America’s Newsroom with Sandra Smith and Bill Hemmer.

“It’s important to remember but so interesting is that the children who were not yet born from so many of the victims, they are now 18,” Berman said at one point. “They are now graduating high school. Some of them, we learned, training to be firefighters or policemen like their parents. The generations go on, but the memory doesn’t fade. That is why today is so important and the ceremonies so important and the names as they are read. It’s so important not just the number of them but listen to each one because each name is a story and a void.”

MSNBC did not run NBC News programming this year, anchored by Matt Lauer, Katie Couric and Tom Brokaw, as it transpired on the morning of Sept. 11, 2001.

This was something the network had done up until last year.

Trump opened by saying he was “watching a business news show where [former GE chief] Jack Welch was being interviewed,” when he heard that the North tower had been hit.

Tonight’s edition of the CBS Evening News with Norah O’Donnell will feature O’Donnell’s interviews with the families of military members who died fighting in Afghanistan following 9/11 as well as two combat veterans of the war. She talks with them against the backdrop of a now-canceled “secret summit” between President Donald Trump and members of the Taliban, the group that harbored al-Qaeda operatives behind the terrorist attacks.

NBC Nightly News with Lester Holt will report on the children who lost a parent in the line of duty on 9/11 and who are now joining the FDNY, and Holt speaks with one of their mothers for a piece airing on Tues, Sept 10. Holt also interviews a first responder currently battling cancer from 9/11, and Nightly News has an interview with Luis Alvarez’s brother, airing tonight on the newscast.

Katie Couric tweeted out footage of her 9/11 coverage with Matt Lauer on Today.

8:46 AM – the exact time that the first tower was hit. 2,977 people killed, more than 6,000 people injured. Countless families ripped apart, too many broken hearts to imagine. A country forever changed. Remembering those we lost on 9/11. I will always remember. #neverforget pic.twitter.com/b1GSIprcy8