NEXT:Savannah Guthrie and Hoda Kotb Are Hosting Their Own Today Show Digital Video Series
PREVIOUS:Hurricane Michael Has Made Landfall in Florida as a Category 4 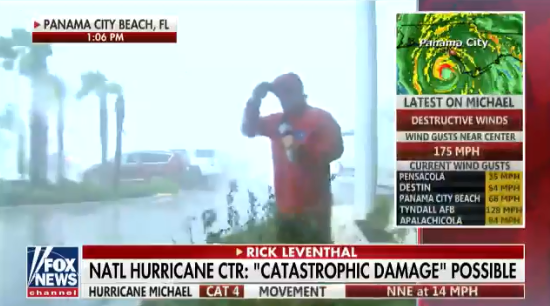 It appears this year’s hurricane season is lasting longer than usual (it feels as though we’re saying that every year), because Hurricane Michael is terrorizing the Southeastern United States as I type this.

As of 5 p.m. ET, Hurricane Michael is 30 miles west of Bainbridge, Ga., and 70 miles southwest of Albany, Ga., with maximum sustained winds of 125 mph, moving north northeast at 16 mph.

Below is who’s at the panhandle (we will continue to update this story as more information trickles in):

Conditions worsening quickly in Panama City as #HuricaneMichael nears. This is going to be a bad one. Full coverage on @NBCNightlyNews pic.twitter.com/TnWnt9o7fU