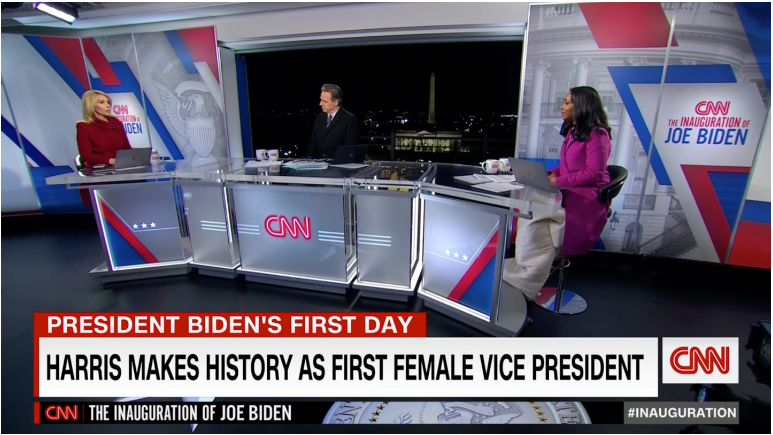 Relative to the prior three months before the election, CNN is up +57% in total day viewers, and +76% in the total day adults 25-54 demo since the day after the presidential election.

This is quite a sea change from what CNN was hauling the prior 3 months. From August through October 2020, CNN averaged 1.1 million total day viewers, and 275,000 adults 25-54. It was the third-most-watched network on cable news in total day, and the second-ranked cable news network among adults 25-54 during that time span.

CNN has also climbed to No. 1 in both total day and prime time among adults 25-54, the age demographic advertisers of TV news prefer, and is No. 1 in dayside hours.

Here’s how CNN looks in dayside since the inauguration in the dayside daypart:

Since the election through the inauguration:

And here’s how CNN stacks up since the election through the inauguration day.

Since the election through inauguration day:

Compared to the same time period in 2020, which featured Donald Trump‘s first impeachment trial, CNN is +192% in total day viewers and +225% in the demo.

How did this happen? How did CNN go from third in the ratings to first in January 2021? A scorching hot news cycle happened. The presidential election lasted for longer than anyone expected, and viewers continue to crave updates on the Covid-19 pandemic. CNN has been delivering wall-to-wall anchored news coverage of both events on weekdays and weekends. There’s even a Covid-19 tracker graphic on the side of the screen that frequently updates in case you’ve forgotten how bad it’s gotten.

The domestic terrorist attack on the U.S. Capitol on Jan. 6 also lifted the network’s ratings averages. This was an event which garnered a ton of interest not only among rabid news viewers, but perhaps more importantly, among people who aren’t consistent cable news consumers.  That coverage gave CNN its highest ratings for a single day in the network’s 40-year history (5.2 million average total viewers throughout the day).

Then, there was a presidential inauguration earlier this week, an event during which CNN attracted more viewers than its broadcast and cable network competition.

And if second Trump Senate impeachment trial happens in February, its highly possible that CNN—a breaking news juggernaut that also happens to attract a lot of viewers who loathe the former president—may remain No. 1.

“CNN is a trusted source of news at a time when people are searching for truth in a galaxy of misinformation,” CNN U.S. evp of programming Michael Bass told TVNewser. “Facts first has never been more essential than it is right now, in the midst of a devastating pandemic and the wake of an attempted overthrow of the election, and we are very gratified the audience is turning to us in unprecedented numbers on television and online.”

This hot news cycle will cool off at some point in 2021, and one would think CNN’s ratings will come back down to Earth, right? Time will tell. But for now, the network is enjoying the ride.