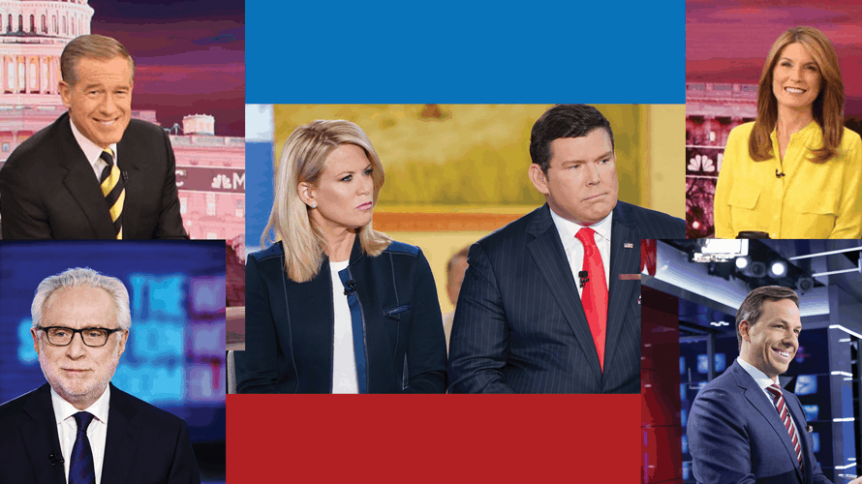 There was a cable news-focused story in this week’s issue of Adweek (which we recommend you pick up!!), and it was about how the three major networks are approaching 2020 election coverage.

According to Adweek/TVNewser’s A.J. Katz, the 2016 presidential race propelled all three cable news networks to what, at the time, was each of their most watched years ever in prime-time total viewers (though Fox News and MSNBC topped those numbers in 2018).  Together, the three networks raked in an estimated $2 billion in ad revenue that year.

Fox News marketing chief Jason Klarman told Adweek in October that it’s targeting “everybody else in the middle” with its 2020 election coverage.

“Brands live within the culture, and, as we were looking at the election brand, we wanted to embrace and reflect what was happening in the electorate,” Klarman told Adweek in a follow up conversation, noting that 50% of voters participated in the 2018 midterms, compared to one-third in 2014. “People are far more engaged in the political process than they have been in more than 50 years.”

Is going for “the undecideds” a good idea?

Paul Friedman, now a TV news industry consultant who spent decades as a high-level producer and executive at ABC, NBC and CBS News, told Adweek that Fox News’ strategy of going for the “undecideds” does make sense, especially considering that a solid percentage of the electorate is undecided. However, he continued, “[Fox News, CNN and MSNBC’s] identities are pretty clear now, and it’s hard to imagine that any of them will come up with an idea that builds very much on their core audience.”

CNN Washington bureau chief Sam Feist told Adweek that his network using its live events to draw viewers, including televised debates and Citizen by CNN, its civil engagement platform designed to bring people together to discuss political issues and motivate them to vote. Citizen by CNN held its annual conference in New York in October and hosted a forum in July, with more events planned for 2020.

“It comes down to doing important, interesting and in-depth coverage about the candidates and about the issues with events that matter and where candidates have an opportunity to go directly to the voters,” said Feist, adding that voters get much of their information about whom they’re going to vote for in both the primaries and general election “through interviews and from town halls.” When it comes to election coverage, “we believe that viewers are drawn to depth and experience, and we have both,” Feist added.

MSNBC declined to comment to Adweek on its strategy to grow its audience during the 2020 race. However, earlier this year, the network launched a new marketing campaign under the “This Is Who We Are” umbrella, touting NBC News and MSNBC’s reporting and highlighting its roster of hosts and reporters that are breaking news and providing political analysis.