NEXT:Wednesday, Jan. 20 Scoreboard: CNN Is No. 1 on Inauguration Day, MSNBC Posts Highest-Rated Inauguration Day Ever
PREVIOUS:Tom Brokaw Is Retiring From NBC News After 55 Years at the Network 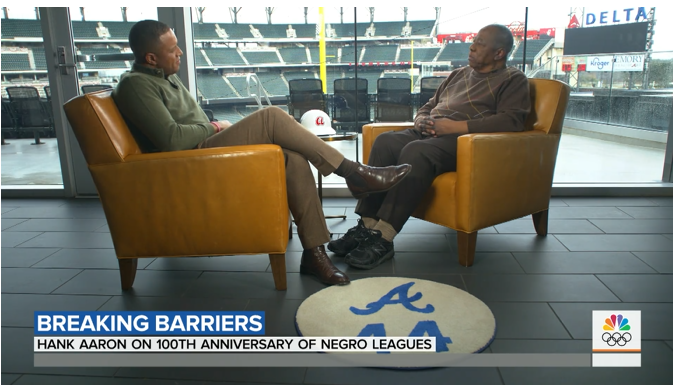 Major League Baseball Hall of Famer Henry Aaron died Friday at the age of 86, according to his daughter.

The cause of death for the Atlanta Braves icon has yet to be made public.

“We are absolutely devastated by the passing of our beloved Hank. He was a beacon for our organization first as a player, then with player development, and always with our community efforts,” Atlanta Braves chairman Terry McGuirk said Friday in a statement. “His incredible talent and resolve helped him achieve the highest accomplishments, yet he never lost his humble nature. Henry Louis Aaron wasn’t just our icon, but one across Major League Baseball and around the world. His success on the diamond was matched only by his business accomplishments off the field and capped by his extraordinary philanthropic efforts. We are heartbroken and thinking of his wife Billye and their children Gaile, Hank, Jr., Lary, Dorinda and Ceci and his grandchildren.”

Hank Aaron played one year in the Negro Leagues before making his Major League debut with the then-Milwaukee Braves in 1954. On April 8, 1974, the Atlanta Braves star surpassed Babe Ruth as Major League Baseball’s all-time home run leader, and is 2nd in MLB history with 755 career home runs. The Hall of Famer made All-Star teams every year from 1955-1975, is a World Series champ (1957), and remains MLB’s all-time leader in RBI and total bases.

Aaron experienced racism as he approached 714 home runs, a record that had been held by Babe Ruth and had been viewed across the sport as untouchable. He received hate mail and faced death threats in ballparks across the country as he approached Ruth’s record, only to ultimately surpass Ruth and emerge as an ambassador for the sport in the ensuing years.

Aaron was the Atlanta Braves’ senior vice president up until his passing.

Today show co-anchor Craig Melvin sat down with one of the greatest to ever do it last February to mark the 100th anniversary of the Negro Leagues. Here’s that interview.