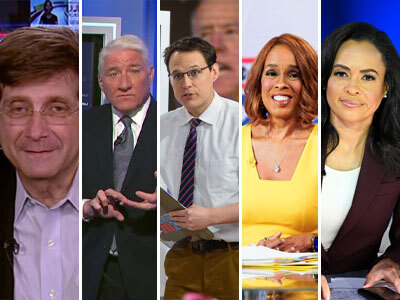 We can all agree that last week was an unbelievably demanding one for the news media. It was also a tough one for those who cover the news media. Now that we’ve had time to take a breath after the chaotic week that was, TVNewser is naming its “5 MVPs of Election Week 2020.”

Before anyone questions our choices, or why we left any deserving candidates out,  please note that these are just five of the hundreds of men and women who did fantastic work in front of and behind the camera last week under extraordinarily difficult circumstances. Much respect to you all.

Here are our Election Week MVPs:

Democracy 2020 co-anchors Bret Baier and Martha MacCallum (co-MVPs in their own right), had Mishkin on the special election night broadcast about an hour after the network called Arizona so the polling chief could explain his team’s thinking.

“We made it after a half hour of debating it,” Mishkin told Baier and MacCallum. “I’m sorry, the president is not going to win enough votes to eliminate that seven-point lead.”

Baier responded by saying, “100% sure? So all this pushback, you are going to say we made the right call when we made it?

The CNN chief national correspondent and midday host might be better known to more casual news viewers as CNN’s election-map guru, the man who runs the “Magic Wall” during Election Night in America coverage.

King has an encyclopedic knowledge of Americans’ voting patterns in various pats of the country, having covered the previous eight presidential campaigns and every midterm in between; repeat visits to all 50 states dating back to 1987 gives him a unique insight into how Americans traditionally vote.

CNN’s Energizer bunny, King at one point analyzed election results from the Magic Wall for 11 consecutive hours, from when CNN’s Election Night in America coverage kicked off (Tuesday, Nov. 3 at 4 p.m. ET), until 3 a.m. Wednesday, before making a return to CNN coverage Wednesday afternoon.

According to the Washington Post, he slept two and a half hours on Tuesday night; four hours on Wednesday night; and another three hours Thursday night.

He has requested (and been granted) some deserved time off later this month.

The longtime CNN anchor gave props to his staffers:

If the #magicwall helped you understand the #2020 vote, thank Caroline and her creative colleagues as much or more than me. https://t.co/g1y53kth9b

MSNBC senior ep (and the man in charge of the network’s Decision 2020 coverage) Pat Burkey warned us we’d be seeing a lot of Kornacki (and even a “Kornacki Cam” keeping tabs on him even when he wasn’t speaking) and boy did we ever.

Kornacki, one of the most energetic and informative people on TV throughout the week, was at “the big board” for the start of MSNBC’s Decision 2020 coverage at 6 p.m. ET on Tuesday, Nov. 3, and remained there until 1 p.m. ET on Wednesday, Nov. 4. That’s 19 consecutive hours on-air.

The hashtag #TrackingKornacki helped people follow the sleepless data guru, who caught the attention of Chrissy Teigen and countless other pop culture figures.

The CBS This Morning co-host worked abnormal hours last week. For instance, on election night, King was on television from 7 p.m. until 3 a.m ET. She returned to the air just 3 hours later for CBS This Morning, staying on until noon ET to do CTM East and West Coast live.

This would become a routine for King throughout the week.

The longtime CBS Newser reportedly slept in her signature yellow dress on a couch in the Times Square studio at one point.

Honorable mentions from the CBS side: Polling chief Anthony Salvanto, who worked basically non-stop throughout the week, and political correspondent Ed O’Keefe, who not only sat at the desk during the week, but was also on-set for CBS This Morning: Saturday coverage.

Linsey Davis has seen her stock rise in recent months. The ABC Newser has co-anchored 2020 political convention, debate and election night coverage for the TV network, along with George Stephanopoulos and David Muir. In addition to her work on the linear network, Davis is the lead anchor for ABC’s streaming news service, ABC News Live. Last week, she anchored multiple hours of coverage on the streaming service before joining ABC prime time coverage.

What makes Davis an MVP in our eyes is her versatility. She was pulling double duty on digital and linear all week, and no other on-air talent was doing that. As a result, she spent nearly as much time on-camera as her fellow honorees.

In 1964 when Kamala Harris was born, black women still couldn’t vote. Think about the magnitude of that. ‘There’s so much power in seeing someone who looks like you.’ @LinseyDavis