NEXT:Jan. 19 Sunday Show Ratings: Meet the Press Takes First Place in All Relevant Measurements
PREVIOUS:Sean Hannity Gets a Super Bowl Interview With Trump, Airing on Fox Ahead of the Game 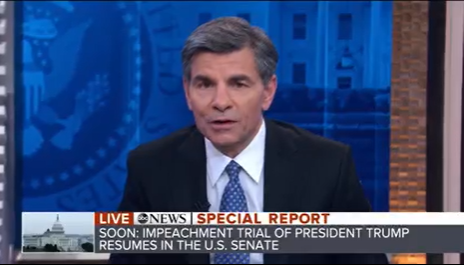 Fox News and ABC were top networks for live coverage of the Senate impeachment trial on Thursday afternoon.

As shown above, the 6 networks averaged a combined 7.83 million total viewers during the afternoon coverage period. That’s -12% from the second day of Senate impeachment trial coverage (Wednesday, Jan. 22), and -29% from opening day.

MSNBC and CNN were the top-rated networks on day 2 of the Senate trial (Wednesday, Jan. 22) during the common 1-5 p.m. ET coverage period. The 6 networks averaged a combined 8.9 million total TV viewers during that interval.

Fox News was the highest-rated network on opening day of the Senate trial (Tuesday, Jan. 21), not only in average total viewership but also in the A25-54 demo during the 12:30-5 p.m. ET coverage period.

Fox News was also No. 1 on Tuesday, Wednesday, and Thursday in prime time.

It’s worth remembering streaming viewing is not included in these figures, and it’s very likely that many working Americans have been watching the trial on computers or other devices. Additionally, the figures do not include Americans who were watching on non-Nielsen-rated networks like PBS or C-SPAN.