NEXT:Here's Who Turned Up at the CBS News WHCD Cocktail Party
PREVIOUS:Here's What We Noticed at the Playboy and NBC News/MSNBC After-Parties 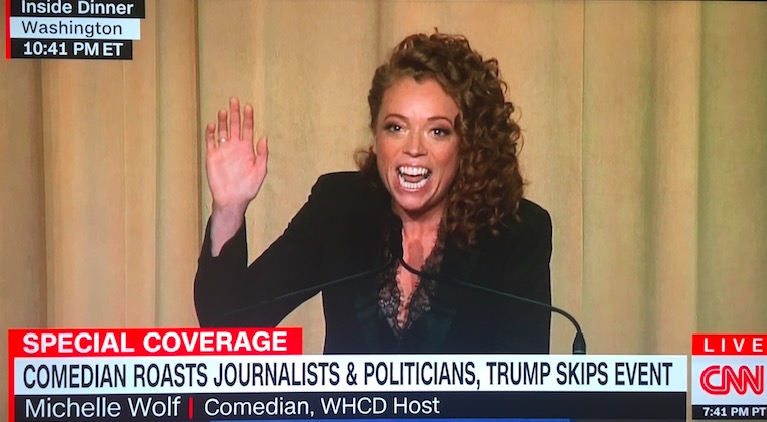 Comedian Michelle Wolf saved some of her harshest jokes during her set at the White House Correspondents’ Dinner for President Donald Trump, Vice President Mike Pence and Sarah Huckabee Sanders. In addition to a couple F-bombs, which aired live on CNN and MSNBC, she also lobbed these salvos at members of the media:

“We’ve got our friends at CNN here. Welcome guys. It’s great to have you. You guys love breaking news. And you did it. You broke it. Good work. The most useful information on CNN is when Anthony Bourdain tells me where to eat noodles.”

Fox News is here. So you know what that means, ladies. Cover your drinks. Seriously. People want me to make fun of Sean Hannity tonight, but I request not do that. This dinner is for journalists.”

“I watch Morning Joe every morning. We now know Mika and Joe are engaged. Congratulations, you guys. It’s like when a me too works out.”

“We also have Rachel Maddow. She’s the Peter Pan of MSNBC. But instead of never growing up, she never gets to the point. Watching Rachel Maddow is like going to Target. You went in for milk, but you left with shampoo, candles and the entire history of the Byzantine Empire. I didn’t need this.”

“And of course, Megyn Kelly, what would I do what about Megyn Kelly? Probably be more proud of women. Megyn Kelly got paid $23 million by NBC, then NBC didn’t let Megyn go to the Winter Olympics. Why not? She’s so white, cold and expensive, she might as well be the Winter Olympics. By the way, Megyn, Santa is black. The weird old guy going through your chimney was Bill O’Reilly.”