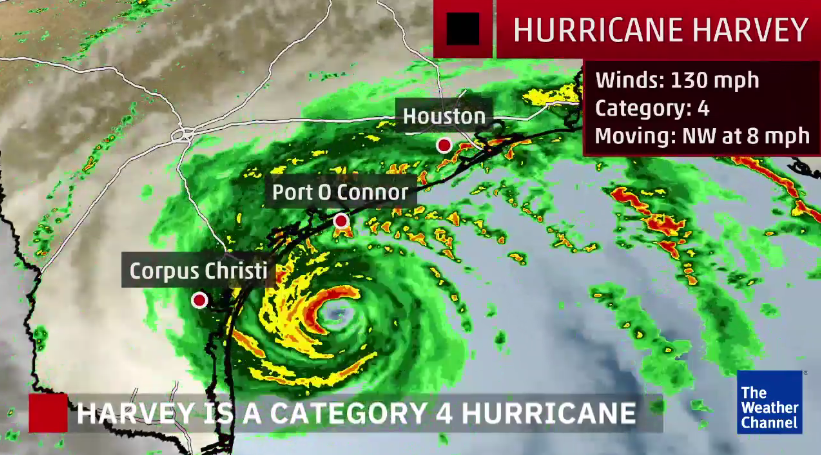 Hurricane Harvey continues to intensify, and as of 8 p.m. EDT / 7 p.m. CDT, it’s now at Category 4 status off the coast of Texas. Harvey is bringing maximum sustained winds of 130 mph, is located about 35 miles east of Corpus Christi, and moving northwest at around 8 mph.

According to The Weather Channel, Harvey will likely be the nation’s first Category 4 landfall in over a decade late Friday or Saturday morning, poised to decimate the Texas Gulf Coast with rainfall flooding, dangerous storm-surge flooding and destructive winds this weekend that could leave parts of the area uninhabitable for an extended period of time.

Eight million people are under hurricane warnings, and nearly 1 million more are under tropical storm warnings.

Hopefully we won’t have a Hurricane Katrina situation on our hands, a catastrophic storm that hit New Orleans 12 years ago next week, and decimated NOLA and the Louisiana Gulf Coast.

Here’s the most recent complete advisory from the National Hurricane Center:

Here are the most up-to-date Hurricane Harvey network coverage plans for this evening and the weekend:
ABC News: