NEXT:Here's How Fox News Media Is Honoring Juneteenth
PREVIOUS:June 14 Sunday Show Ratings: Meet the Press Finishes No. 1 Across the Board, Delivers Week-to-Week and Year-Over-Year Growth 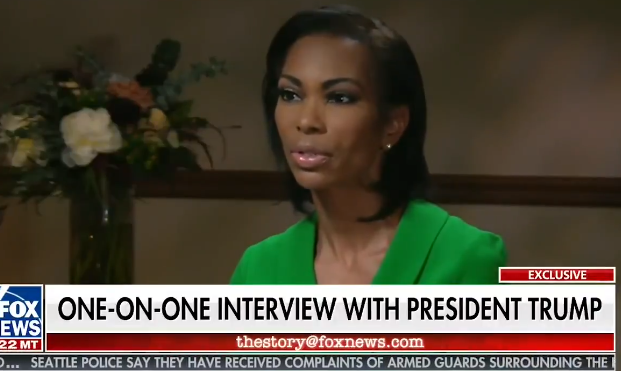 Back in December 2018, in her first-ever interview with President Trump, Fox News anchor Harris Faulkner was criticized by some outside the Fox News universe for her performance. Many felt she went to easy on him and that she has been too quick to defend him in the past.

Last week, she received a second opportunity to interview Trump, and it was the first TV interview for the president since the murder of George Floyd. The stakes were higher, and the reviews for her performance have been mostly positive this time around.

President Trump didn’t look particularly comfortable throughout the interview, and Faulkner’s questioning certainly had something to do with that.

“You look at me, and I’m Harris on TV, but I’m a Black woman. I’m a mom,” Faulkner at one point told Trump. “You’ve talked about it, but we haven’t seen you come out and be that consoler in this instance.

“And the tweets, ‘When the looting starts, the shooting starts,’ ” she added, citing Trump’s widely criticized response to the Minneapolis police brutality protests, which many took to be a racist threat of violence.

“Why those words?” she asked.

The Washington Post wrote: “It was the first time Trump had been questioned about the inflammatory tweet in a televised interview on a major network.”

Columbia Journalism Review noted that Faulkner “carved an entirely different path from that followed by many of her colleagues,” adding, “She was neither antagonistic nor admiring. She put herself into the interview, framed in her roles as a Black woman and a parent, in a way that journalists rarely do with her skill and care.”

Bill Grueskin, who wrote the piece for CJR, added:

The interview drew praise from other journalists. Faulkner “phrased her questions as one human to another, with empathy and respect,” says Cheryl Devall, a longtime radio and print journalist with a string of awards for her work on AIDS and Black America, the 1992 Los Angeles riots and the war on poverty. Trump’s responses, Devall told me in an email exchange, showed that he was “incapable of responding in kind” and were indicative of “his default option to dismiss [journalists’] humanity, legitimacy and commitment to truth.”

MSNBC’s Joy Reid, not usually one to praise Fox News, gave props to Faulkner for her performance.

Gotta give @HARRISFAULKNER a pound. Trump, his campaign and his White House team likely chose her to interview with expecting an easy, solicitous chitchat like his “black roundtables.” But she did a tough, thorough interview instead. She did her fellow Minneapolis journos proud. https://t.co/DwFt1lHktr