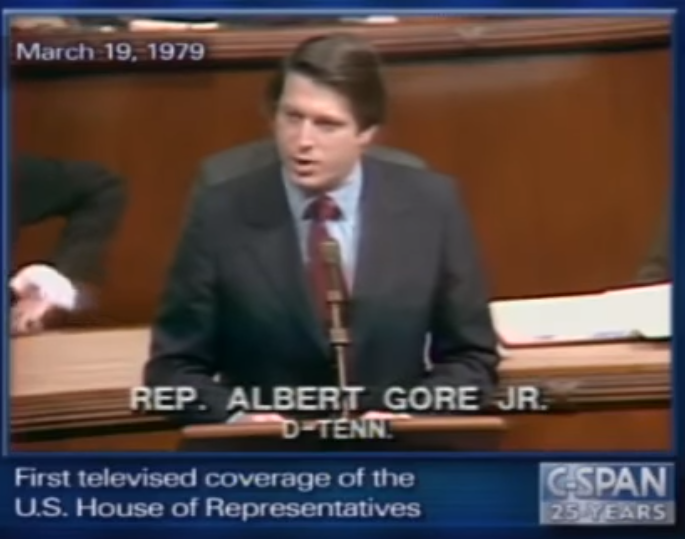 Just admit it, you know you love C-SPAN.

Today, the legendary TV news network–created by cable–marks its 40th year of live gavel-to-gavel TV coverage of Congress. The House of Reps. went on cable television on March 19, 1979, the first day of C-SPAN, a commercial-free, privately-funded, non-profit public service by one’s cable or satellite provider.

“Mr. Speaker: On this historic day, the House of Represenatives opens its proceedings for the first time to televised coverage. I wish to congratulate you for your courage for making this possible, and the committee who has worked so hard under the leadership of Congressman Charles Rose to make this a reality.

Television will change this instution, Mr. Speaker, just as it has changed the executive branch. But the good will far outweigh the bad. From this day forward, every member of this body must ask himself or herself, “How many Americans are listening to the debates which are made.

When the House becomes comfortable with the changes brought by television coverage, the news media will be allowed to bring their own cameras into this chamber. In the meantime,  there is no censorship. Every word is available for broadcast coverage, and journalists will be able to use and edit as they see fit.

The solution for the lack of confidence in government, Mr. Speaker, is more open government at all levels. I hope, for example, that the leadership of the United  States Senate will see this and see this as a friendly challenge to begin to open their proceedings.  The marriage of this medium and our open debate has the potential, Mr. Speaker, has the potential to revitalize representative democracy.

For the last 40 years, Americans have been able to see directly for themselves and make up their own minds about many momentous political and policy debates, thanks to C-SPAN.

Yes, the network often gets the rep of being “boring,” but it has played host to some historic and dramatic events which played out live on House TV over the years; events that definitely aren’t boring.

Forty years ago C-SPAN first put the U.S. House of Representatives on television, opening a window for viewers to get an unfiltered view of government. While Washington may have changed, C-SPAN is still C-SPAN:

Here’s a playlist of key C-SPAN moments from 40 years of Congress on TV, one for each year.