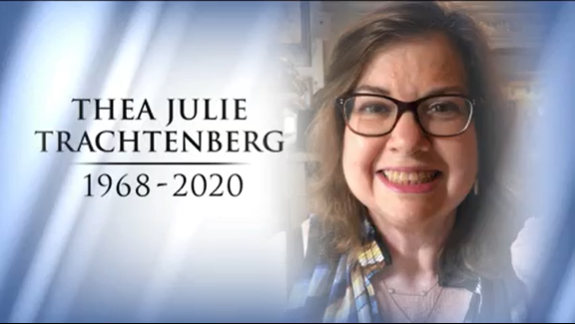 For the second time in less than a week, Good Morning America has lost one of its team members.

George Stephanopoulos, who earlier in the broadcast announced he had tested positive for COVID-19, broke the news of Trachtenberg’s passing:

One of our long-time producers passed away early Easter Sunday  morning. Thea Trachtenberg was a force on this show, a mentor to so many on our staff and a colleague and friend with a biting wit, skeptical eye, and a very big heart. Thea produced big interviews with presidents and President Obama, the stars of broadway, the Muppets, and the star of Star Wars, but the interview she loved the most was Bono. A long-time U2 fan she proudly shared this photo from 2012. She was also a mentor to so many on our staff.

Trachtenberg, a giant among staffers at the ABC morning show, is a two-time cancer survivor who recently marked 20 years as a staff member on the broadcast.

In his note to staff, GMA senior executive producer Michael Corn said Trachtenberg had been “battling serious heart and lung disease for some time.” The doctors said she did not have COVID-19.

“She was tireless in her pursuit of perfection in her pieces which is why she was the first choice of so many of the top talent at ABC over the years,” said Corn. “Extraordinarily gifted at this thing we do, she could craft with equal skill epically smart and or heart-wrenching and or funny television. That’s no doubt because Thea herself was razor smart and bitingly funny and filled with heart.”

“How we loved it, how we laughed, Thea always saw the possible,” said Sawyer. “More heart, more clarity, more connection. It was never just reporting. It was a way to bring light to the world. Thea Tachtenberg was a force as a producer, as a colleague, as a human being. She’ll be very missed. Such an amazing human being.”

Terribly sad. Thea was a master of her craft, an incredibly talented producer and writer, and a beloved member of our @GMA team. Her yearly Christmas Poem always made me smile. RIP Thea Trachtenberg. https://t.co/fiFDiaNVYX