NEXT:WGN America Will Morph Into a National Cable News Network In Prime Time
PREVIOUS:Ronan Farrow's First HBO Project Will Be a Documentary Investigating Threats Against Journalists 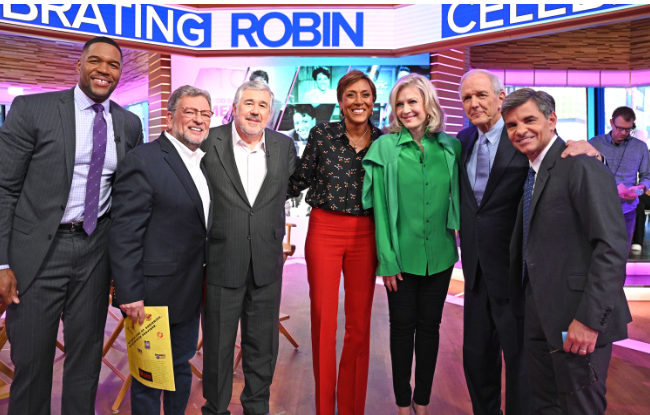 Many sports fans recall Roberts’ time on-air at ESPN. There, she worked alongside Ley and Steiner on SportsCenter and became the first woman to co-host the legendary ESPN studio show NFL Primetime.

In 2005, Roberts officially moved to GMA, alongside Gibson and Sawyer.

“One of the great days, other than the first day I started, was when [then-president of ABC News] David Westin walked into my office and said, ‘Hey, we’re going to make you the co-anchor with Charlie and Diane,” Roberts recalled.

“From the moment she walked in the door it was just freeing for everyone to be in the presence of this spirit,” said Sawyer. “It was incredibly and immediately more joyful when she was around.”

Disney CEO Bob Iger added: “Robin’s authenticity and I think her warmth not only makes people comfortable when they sit and talk with her, but you think when you’re watching her, you’re watching a friend.”

We featured Roberts and Sawyer on the cover of Adweek’s 15th anniversary of TVNewser issue (which hit newsstands almost 1 year ago to the day), and Roberts told us, among other things, what she now knows about the business that she didn’t 15 years ago.

One thing that the many lessons that Diane [Sawyer] has taught me that you want to – and I know you’ve heard me say this over and over again but I always attribute to Diane and I love it:  You want to as a journalist in whatever we’re doing is for your story, for your piece to create a reaction that leads to action.  And so that, to me, I don’t know why that always stays with me that no matter – it doesn’t matter how short or long or serious or not serious or what we’re  doing— that you just want , and you can tell when there’s a reaction.