NEXT:Adweek's Hot List: What Are Your Favorite Shows and Networks?
PREVIOUS:From Hurricanes to Earthquakes, CBS's Manuel Bojorquez Is On the Move 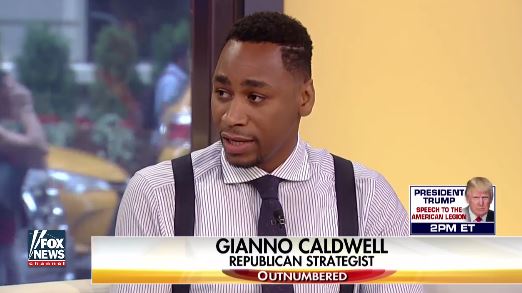 A frequent guest on the network, Gianno Caldwell has signed with Fox News as a political contributor.

“Gianno’s insight has been widely valued across our network, prompting healthy discussion and debate on critical issues facing the country,” said FNC programming president Suzanne Scott. “We are delighted to have him officially join the FOX News Channel, sharing top-notch analysis with our viewers.”

A Chicago native, Caldwell began his career in government as Director of Government Relations for the suburb of Naperville, before moving to the role of legislative liaison to the Illinois State Treasurer. In 2011, Caldwell was the Director of African American Outreach for the DuPage County Republican party, and served as an advance staffer on Mitt Romney’s 2012 presidential campaign.

He supported President Trump during the campaign, but has been increasingly critical of some of Trump’s recent comments.

“I am excited, honored and humbled to bring my political analysis exclusively to the number one cable network in the nation,” said Caldwell. “Fox News has felt like family since my first appearance on the network. I am thankful for God’s continued favor throughout this journey and I am thankful for the support of my family, colleagues, and friends.”