NEXT:Gayle King Expresses Her Displeasure On-Air Upon Learning Radio Stations Are Banning 'Baby It's Cold Outside' From Their Air Waves
PREVIOUS:CNBC Names Tiffany Sam Chow Its New Head of Business Development and Strategy 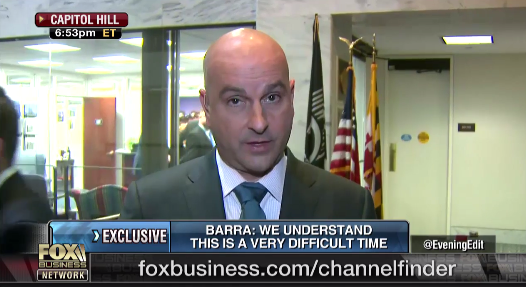 Barra was on the Hill meeting with congressional delegrations from Ohio, Maryland (Wednesday) and Michigan (Thursday) to attempt to explain why GM is closing four U.S. assembly plants next year. The company said it needs to cut about 8,000 salaried workers, as well as about 3,300 hourly workers across those four plants, to cut costs and invest more in electric and self-driving cars.

This comes eight years after American taxpayers bailed out the Detroit-based automative juggneraut.

On recent corporate layoffs, Barra told Lawrence, “There’s definitely opportunity for many underrepresented workers to work in some of our other factories around the country that are growing, and that is our focus right now.  We understand that it’s a very difficult time, it’s a very difficult announcement to make. And so we’re really focused on making sure they understand the situation, they know the options open to them and that’s where our focus is right now.  And I really was pleased to have an opportunity to speak with many of the representatives from Maryland to be able to understand their issues. And later we’ll move forward and make sure we stay in good connection.  But our focus right now is on the workers.”

On corporate changes General Motors needs to make, she remarked: “This industry is transforming and we need to make sure that General Motors is around for the next several decades we have responsibilities to many of our stakeholders, our employees, our folks who have retired from the company, our investors.  And so we’re trying to make sure that we have a strong General Motors that is going to be ready, and lead in a rapidly changing transportation market.”