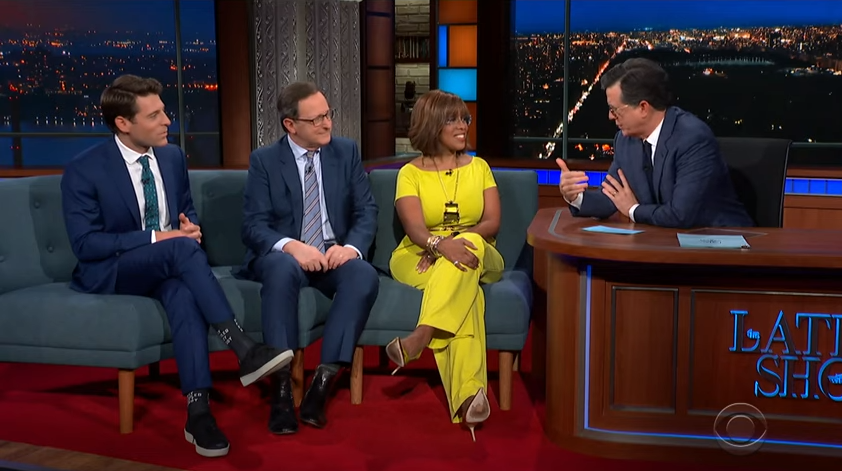 The new CBS This Morning trio of Gayle King, Anthony Mason and Tony Dokoupil appeared together yesterday evening on The Late Show with Stephen Colbert to talk about the revamped morning show.

“We’ve been about the same thing for the past six of seven years, and we want to continue to that,” said Mason, a longtime CBS Newser who was most recently co-host of CBS This Morning Saturday. “The news leads the front. We’re serious about it. We also love culture, we also love consumer stuff; all that’s still there.”

King added that they do still like to have fun and present the news “with a heart.”

She also returned to the initial discussions she had with CBS News president Susan Zirinsky.

“CBS has had issues. I’m not telling you anything you don’t know,” the always candid King told Colbert, presumably referring to the various sexual harassment scandals that led to the exits of Charlie Rose, Les Moonves and Jeff Fager in recent years.

“I said to Susan Zirinsky, who’s our new president: ‘Gosh Susan, we’re just starting from scratch.’ And she said: ‘Don’t say that. That is not what’s happening because the bones and the core of the show are there.’ She bitch-slapped me around a couple of times and I said, ‘Got it! Got it.’ But I was worried about starting from scratch. When you really think about it, the core of who we are — great storytelling, original reporting, good writing — has not changed. You just have new people sitting at the table. I think that’s a good thing.”