NEXT:Fox News Is the 'Most Tweeted About News Outlet' of 2018
PREVIOUS:General Motors CEO Mary Barra to FBN's Edward Lawrence on Factory Closures: 'It’s a Very Difficult Announcement to Make' 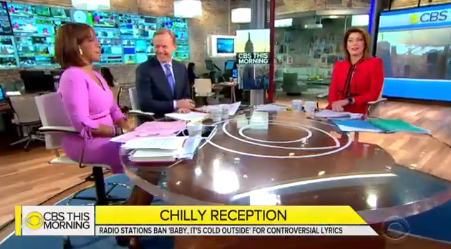 Never one afraid to speak her mind, CBS This Morning co-host Gayle King was not happy to learn this morning that the classic Christmas song from the 1940’s, Baby It’s Cold Outside is being banned at a number of radio stations across the country, seemingly in light of the #MeToo movement.

According to a report from CBS News’ Jamie Yuccas, there are some radio listeners who feel the lyrics describe a rape scenario and that the song no longer merits a spot on the station playlists. One example is San Francisco radio station 96.5 KOIT. The station had taken the song off the air, but has now decided to conduct an online poll asking listeners whether or not to put the song back on. It appears most listeners want it back on. 90 percent, to be exact.

Count King as one of the 90 percent:

I want to say to people, it’s a Christmas song that was written years ago. I think you have to look at the intent of the song and when you look at the intent, to me, it’s a very flirtatious back and forth between the two of them. I think you can look at anything and read something into it these days. And I don’t think that was the case with the intent of that song. I think Tony in the studio who I love and adore, said “what’s next? I saw mama kissing Santa Claus?” Am I the only one that feels this way?

The radio station’s poll whether to put “Baby It’s Cold Outside” back on the air runs through Monday and at last check, the votes were running more than 90% in the song’s favor. pic.twitter.com/cGvbqADA83

Dickerson mostly agreed, saying, “I think people are calling in because it’s basically triggering this reaction in them, that’s — these are people who have been through an experience. That’s pretty powerful. I totally get what you’re saying about the context. but that powerful reaction has to be dealt with.”

O’Donnell didn’t totally agree with King. She cited footage the show aired of Esther Williams and Ricardo Montalbán performing the song in Neptune’s Daughter, and called the performance “somewhat coercive” and said that she was actually re-thinking the song.

“Not me. So, we just have to agree to disagree,” King said to O’Donnell. “I just think that it’s a light, flirtatious song, and she clearly doesn’t seem to be so upset; keep looking at the whole damn – I mean the whole darn song before you make your decision.”

“I’m so irritated by this. It’s like, people, sit down,” she said, while chuckling. “We are losing our sense of humor nowadays, and I’m a big supporter and big proponent of the #MeToo movement, but I just don’t think we have to knit-pick every single little thing.

I know I’m gonna get hammered for this,” she continued, “so let’s just move along, please.”

However, and as you’ll see in the responses to CTM’s tweet, most folks seem to agree with King.