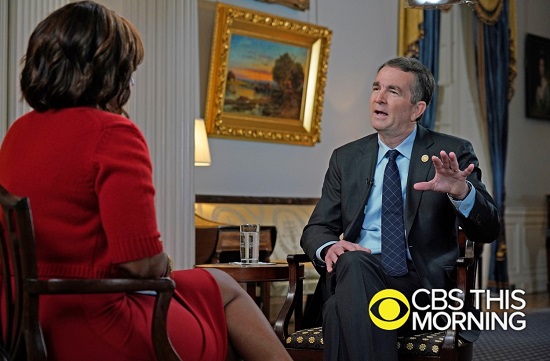 CBS This Morning co-host (and recent Top 30 TV Newsers of the Past 15 Years honoree) Gayle King conducted a noteworthy interview with Virginia’s embattled (to put it mildly) Democratic governor Ralph Northam, part of which aired yesterday on Face the Nation, with more airing today on CBS This Morning.

This was Gov. Northam’s first and only TV interview since the racist yearbook photo scandal broke.

The portion of the interview that has received the most attention aired yesterday during Face the Nation. It included King correcting the governor when he spoke about the first Africans to land on American shores:

Virginia Gov. Ralph Northam: “We are now at the 400-year anniversary — just 90 miles from here in 1619. The first indentured servants from Africa landed on our shores in Old Point Comfort, what we call now Fort Monroe, and while—”@GayleKing: “Also known as slavery” pic.twitter.com/AiX96MU1rJ

King addressed that back and forth during this morning’s broadcast, and read a statement Gov. Northam sent to the program regarding that comment: “During a recent event at Fort Monroe, I spoke about the arrival of the first Africans in Virginia and referred to them in my remarks as enslaved. A historian advised me that the use of indentured was more historically accurate -the fact is, I’m still learning and committed to getting it right.”

After King read the statement on-air, she remarked: “You know, I have to say, I did not feel that he was disingenuous or that he was trying to spin a story. He knows that he has a lot of questions to answer…”

King said the conversation was an interesting one, and seemed to walk away from the interview with a positive impression of Gov. Northam. At least the 2019 version of the governor.

“He knows he’s made some big, big, big mistakes and he also wants a chance to make it right and when you talk to people in the state of Virginia many people want to give him a chance,” King later told CBSN’s Anne-Marie Green and Vlad Duthiers.

Here’s part one of King’s full interview with the governor, which aired today on CBS This Morning:

And the second part: