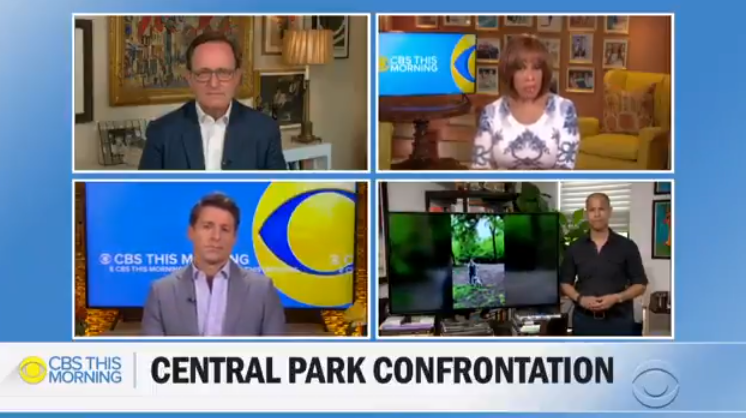 Cellphone footage of a white woman calling police on a bird-watching black man in Central Park yesterday morning after the two argued about her unleashed dog has gone viral.

The woman was walking her dog while a man named Christian Cooper was bird-watching at a wooded area of Central Park called the Ramble. The argument began because her dog was not on a leash, contrary to the Ramble’s rules, according to Central Park’s website.

Cooper recorded video of part of their encounter and posted it on Facebook, where it has since been shared millions of times and became a trending topic on Twitter throughout the day.

“I’m taking a picture and calling the cops,” Amy Cooper (no relation) is heard saying in the video. “I’m going to tell them there’s an African-American man threatening my life.”

Her accusations were false, of course.

During today’s broadcast of CBS This Morning, Gayle King reacted to the video. She admitted to her colleagues that it was tough for her to watch and to deal with.

“Once again, I say thank goodness that there was videotape. I think that as a daughter or a black man and a mother of a black man, this is really too much for me today,” she said. “She’s practically strangling her dog to make these false accusations against another black man.”

With her voice quivering, King adds: “I am really speechless about what I’m seeing on television this morning. It feels to me like open season, and that it is sometimes not a safe place to be in this country for black men. Today is just too too much for me.”

Video of a white woman calling police on a black man in New York City’s Central Park is getting a lot of attention.@VladDuthiersCBS explains. pic.twitter.com/mg1wwOSItl

Cooper said this morning that she wanted to “publicly apologize to everyone.”

She added: “I’m not a racist. I did not mean to harm that man in any way.” She also said she didn’t mean any harm to the African-American community.

Too little, too late, I’m afraid.