NEXT:Ryan Lizza Is Back on CNN
PREVIOUS:The Weather Channel Delivered Its Most-Watched Year Since 2013 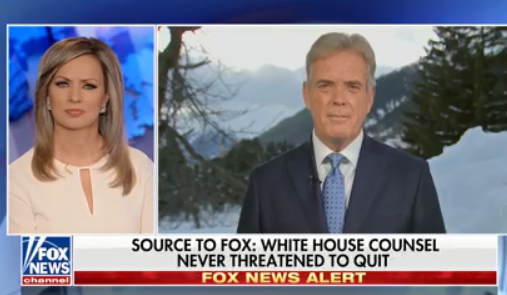 The New York Times report that Pres. Trump called for the firing of special counsel Robert Mueller broke during cable news prime time last night. According to the report, White House counsel Don McGahn threatened to resign over the president’s request, made last June, arguing that firing Mueller would hurt the administration. Pres. Trump eventually backed off, the Times reports.

MSNBC and CNN quickly jumped on the story when it broke in the 8 p.m. ET hour. At the beginning of his 9 p.m. program, Sean Hannity told his viewers that his own sources could not confirm the story, and that “The New York Times is trying to distract you.”

But towards the end of the broadcast, Hannity seemed to concede to The Times report after his Fox News colleague Ed Henry, a member of the network’s news operation, said his own sources were able to confirm the first part of it, that Trump had entertained firing Mueller, but not the second that McGahn was going to quit over it.

“All right, so we have sources tonight just confirming that yeah, maybe Donald Trump wanted to fire the special counsel for a conflict. Does he not have the right to raise those questions?,” Hannity asked rhetorically. “You know what, we’ll deal with this tomorrow night,” he said, and moved on to a high speed car chase.

Sean Hannity: The New York Times is trying to distract you. They say Trump tried to fire Mueller, but our sources aren’t confirming that!

Then, less than 12 hours later, Fox News’s Chief White House correspondent John Roberts seemed to shoot down the Times report based on what his sources told him. “I’m told the president never told McGahn to fire Mueller and McGahn never threatened to quit over it,” Roberts reported from Davos. “There are competing stories here. That’s what I could get from talking to a number of sources today and back when this story first hit June 13.”

What does Pres. Trump think of the Times report? “Fake news, folks. Fake news. Typical New York Times,” he said when questioned before taking the stage at Davos earlier today.