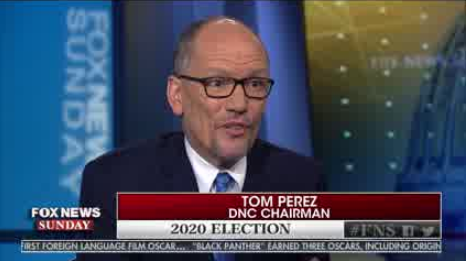 The Democratic Party will be hosting 12 sanctioned presidential primary debates leading up to the 2020 election, but Fox News Channel will not serve as a media partner for a single one of them.

Democratic National Committee chairman Tom Perez announced that the DNC will not work with FNC. According to the DNC, the decision was made in light of the allegations outlined in Jane Mayer‘s story for The New Yorker, where she writes about what she believes is a relationship between the network’s opinion hosts and the Trump administration that’s becoming dangerously cozy.

At one point during her exposé, she refers to Fox News “Trump TV” and “propaganda” for Trump.

One wonders whether the DNC would have given the thumbs-up to FNC to host at least one of its debates anyway, even if the New Yorker story hadn’t been published. After all, many of the allegations outlined in her story have been made public before. Perhaps the timing and the attention swirling around this particular story was considered a tipping point for the DNC.

Chris Wallace, in particular, has been praised by figures on both sides of the aisle for his moderating skills in the past. Perez himself has appeared both on Fox News Sunday and on Special Report with Bret Baier many times before. Wallace, Baier and MacCallum have Democrats on their respective shows often.

Fox News released the following statement in regard to the DNC’s decision:

“We hope the DNC will reconsider its decision to bar Chris Wallace, Bret Baier and Martha MacCallum, all of whom embody the ultimate journalistic integrity and professionalism, from moderating a Democratic presidential debate. They’re the best debate team in the business and they offer candidates an important opportunity to make their case to the largest TV news audience in America, which includes many persuadable voters.”

We reached out to the DNC for comment, and will update this point when we hear back.

Fox Newsers have expressed an interest in forming stronger relationships with Democrats, and were hoping to host a primary debate.

In addition to the personalities from Fox News’ news side, Fox Business anchor Trish Regan, who co-moderated a Republican primary debate in advance of 2016, told us last October she’d love to moderate a Democratic primary debate this time around, if asked.

While they don’t expect to moderate a debate, Fox & Friends cohosts told us last week that the show has, and will continue to invite Democratic party candidates to appear on their show as 2020 approaches.

Steve Doocy: We call everyone every day. Because, in 2016 there were some Republicans who we really had to dig deep to get them to come on the show. And they didn’t for a while for whatever reason. But eventually, they came on.

Ainsley Earhardt: It’s smart for them to come on because we have a lot of independents who watch our show who haven’t made up their minds yet and are more in the middle. So, I highly encourage all the candidates to come on.

The DNC announced last month that NBC News/MSNBC/Telemundo will partner on the first debate in June 2019, while CNN will host the July event.