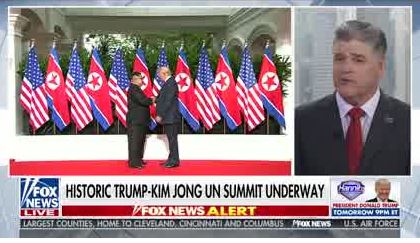 The hour, which drew 5.9 million viewers was the most-watched hour on all of TV last night. It edged The Bachelorette on ABC, which included ABC’s special report for the summit (5.493M) and an 8 p.m. rerun of Mom on CBS (4.812M). It was also an all-time high in both total viewers and the demo for Hannity since the show returned to the timeslot last September.

The three big cable news networks and the four broadcast networks all produced special reports for the start of the meeting, with the cable news in continuous coverage.

The Monday Scoreboard has a break down of the cable news numbers.