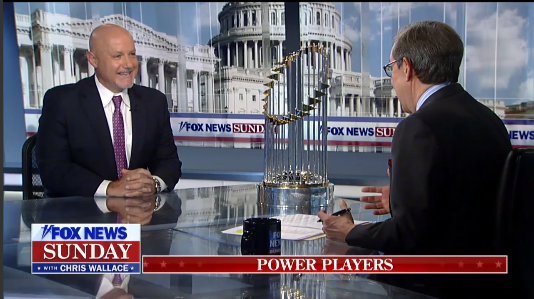 Last week, the Washington Nationals gave the District of Columbia its first World Series title since 1933, and the World Series trophy has been making the rounds in the days since.

The trophy made a stop over the weekend at what can be considered an unlikely venue: The set of Fox News Sunday.

Nationals superfan Chris Wallace sat down with Washington Nationals gm Mike Rizzo yesterday in studio to talk about the Nationals’ first franchise World Series win, team chemistry, and the outlook for next season. Rizzo brought the World Series trophy to the set (as you can see above).

Living up to his reputation as a tough interviewer, Wallace asked a question that’s on every die-hard baseball fan’s mind: Will the franchise be able to re-sign two of its best players for next season: Stephen Strasburg and Anthony Rendon? Both stars are officially free agents.

“Can you afford both of them?” asked Wallace.

“Well, that’s a possibility,” Rizzo responded. “We’re going to have to be very strategic about how we allocate our resources, but they’re two players who are near and dear to my heart. We drafted signed and developed both of them and we certainly would love to see them in a Nationals uniform long-term.”