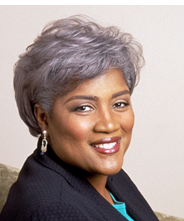 Brazile will offer political analysis across both Fox News and FBN daytime and prime-time programming. She will make her first appearance on The Daily Briefing with Dana Perino today at 2 p.m. ET.

“I’m delighted to be joining Fox News,” Brazile said in a statement. “I know I’m going to get criticized from my friends in the progressive movement for being on Fox News. My response is that, if we’ve learned anything from the 2016 election, it is that we can’t have a country where we don’t talk to those who disagree with our political views. There’s an audience on Fox News that doesn’t hear enough from Democrats.”

She added: “We have to engage that audience and show Americans of every stripe what we stand for rather than retreat into our ‘safe spaces’ where we simply agree with each other. For there is no safety in self-limiting numbers. You can be darn sure that I’m still going to be me on Fox News. I’m going to do what I always do: and dish it out straight, exactly as I see it, with just as much New Orleans hot sauce as folks expect.”

Prior to joining FNC, Brazile was the interim national chair of the DNC during the 2016 presidential election.

CNN and Brazile—a former contributor at the network—severed ties just weeks before the 2016 election following two separate WikiLeaks revelations, where it was revealed that Brazile gave two questions that were to be asked at two different CNN TV events to the Clinton campaign: a Democratic debate on March 6 and a town hall a week later.

When the news broke of the second leak, CNN said it had accepted Brazile’s resignation on Oct. 14, adding, “CNN never gave Brazile access to any questions, prep material, attendee list, background information or meetings in advance of a town hall or debate. We are completely uncomfortable with what we have learned about her interactions with the Clinton campaign while she was a CNN contributor.”

A source close to the situation tells TVNewser that if Fox News ends up getting the chance to host a debate or town hall, Brazile won’t be involved in the process.

Then in October, a subsequent release of emails revealed that among the many things I did in my role as a Democratic operative and D.N.C. Vice Chair prior to assuming the interim D.N.C. Chair position was to share potential town hall topics with the Clinton campaign. I had been working behind the scenes to add more town hall events and debates to the primary calendar, and I helped ensure those events included diverse moderators and addressed topics vital to minority communities. My job was to make all our Democratic candidates look good, and I worked closely with both campaigns to make that happen. But sending those emails was a mistake I will forever regret.