NEXT:Casey Dolan Named Senior Executive Producer of MSNBC Weekdays
PREVIOUS:Savannah Guthrie to Sit Down with Ellen DeGeneres For First TV Interview Since Announcing Her Talk Show Will End Next Year 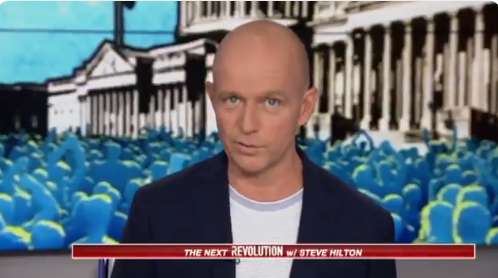 The citizenship ceremony for the British-born Fox Newser was in San Francisco, where he has lived with his family full-time since 2012.

this was the moment…

thanks to everyone at @USCISMediaWest for making this such a special day for me and all my other new FELLOW AMERICANS#ProudAmerican 🇺🇸🇺🇸🇺🇸🇺🇸 pic.twitter.com/p1u2KSIns9

Hilton hosts The Next Revolution, Sundays at 9 p.m. ET./6 p.m. PT on Fox News. The show, which originates from L.A., launched in June 2017, but the “positive populist” joined the network as a contributor in December 2016.

He is the co-founder of Crowdpac, an independent and non-partisan Silicon Valley political and data start-up which assists people in finding and supporting political candidates whose ideologies match up with theirs. Hilton stepped down as the company’s CEO in 2018.

Hilton is also well-known for having served as senior adviser to former Prime Minister David Cameron from 2010-2012. Prior to the 2010 general election, he was Prime Minister Cameron’s head of strategy.