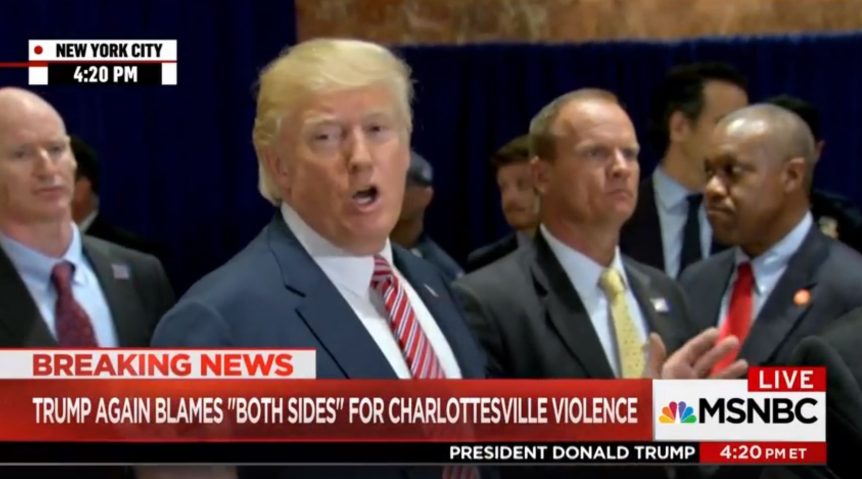 The TV networks got guidance that Pres. Trump was going to make a statement about his infrastructure plan this afternoon, but the members of the press corps assembled in the lobby of his Manhattan tower had other things on their mind. And so did the president.

Flanked by his secretaries of Treasury and Transportation, Pres. Trump opened it up to questions and for 25 minutes talked about how his first statement on the violence in Charlottesville Saturday was “fine,” that the alt-left may have been as much to blame for the situation as the alt-right, that his senior adviser Steve Bannon is not a racist, and that he has a house in Charlottesville–a vineyard in fact.

“Wow. That was something else,” said Jake Tapper. “A stunning tour de force.”

“I can’t believe I’m saying this as the words spill out of my mouth,” said MSNBC’s Nicolle Wallace as she repeated some of what Trump said.

“What you just saw was a president who was needing to unload a lot of frustration,” said CBS’s Margaret Brennan.

“It’s dumbfounding. It’s dumbfounding that he would have spent as long as he did to really get his statement right and then turn around and walk it back,” said Bush White House strategist Sara Fagen.

The cable news networks and streams carried the remarks live, but with little warning that the president was going to take as many questions as he did, the broadcast networks broke in with reports later in the 4 p.m. ET hour.

Fox News’s Kat Timpf said she doesn’t know whether to laugh or to cry about what she watched. “It’s one of the biggest messes I’ve ever seen.”