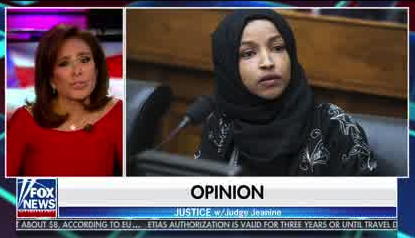 Fox News host Jeanine Pirro has reportedly been suspended by Fox News, roughly one week after claiming on her top-rated Saturday night opinion show that Minnesota freshman congresswoman Ilhan Omar is “sharia compliant” and disloyal to the U.S. Constitution because she wears a hijab.

Pirro’s suspension has been reported by both CNN’s Brian Stelter and New York Times’ Michael Grynbaum. TVNewser has not been able to confirm that reporting.

These reports of a reported suspension come after Pirro –the former Westchester County DA-turned-Fox News prime time host– had her 9 p.m. show bumped this past Saturday for a rerun of the Fox News’ original series, Scandalous.

When reached for comment, a Fox News spokesperson told TVNewser on Saturday “we are not commenting on internal scheduling matters.” The network stuck by that statement when we reached back out on Sunday morning, and Monday morning.

When we reached out for comment today on whether Justice with Judge Jeanine will return to Fox News this coming week, a Fox News spokesperson pointed TVNewser to that Saturday statement and said it isn’t commenting beyond that.

President Trump was not happy to learn that Justice wth Judge Jeanine had been prempted on Saturday night, and tweeted as much the following morning:

Bring back @JudgeJeanine Pirro. The Radical Left Democrats, working closely with their beloved partner, the Fake News Media, is using every trick in the book to SILENCE a majority of our Country. They have all out campaigns against @FoxNews hosts who are doing too well. Fox …..

….must stay strong and fight back with vigor. Stop working soooo hard on being politically correct, which will only bring you down, and continue to fight for our Country. The losers all want what you have, don’t give it to them. Be strong & prosper, be weak & die! Stay true….

….to the people that got you there. Keep fighting for Tucker, and fight hard for @JudgeJeanine. Your competitors are jealous – they all want what you’ve got – NUMBER ONE. Don’t hand it to them on a silver platter. They can’t beat you, you can only beat yourselves!

Fox News had released a statement earlier in the week condeming Pirro’s remarks, saying “We strongly condemn Jeanine Pirro’s comments about Rep. Ilhan Omar. They do not reflect those of the network and we have addressed the matter with her directly.”

It’s worth noting that Pirro has not tweeted since Sunday, March 10.