NEXT:Hoda Kotb Returns to Today: 'It Did Feel Like Christmas Morning a Little'
PREVIOUS:CNN Mexico City Bureau's Newest Correspondent Garnered Praise for His Reporting on the Refugee Crisis in Myanmar 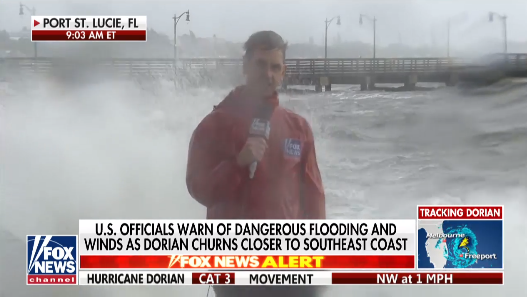 The eye of Hurricane Dorian is still more than 100 miles from Florida’s Atlantic coast, but Fox News’ correspondent Griff Jenkins can already feel it coming.

Stationed by a seawall in Port St. Lucie, Fla., Jenkins delivered what was roughly a two-and-a-half-minute report for America’s Newsroom this morning, while getting totally soaked by the nearby waves.

Jenkins attempted to answer some of Sandra Smith‘s questions, but it became just too difficult to do so after a while.

“I’m just going to step out of the way,” Jenkins said at one point, unable to hear Smith through his IFB. “Our viewers need to see this seawall that’s happening here.”

Meanwhile, up in Jacksonville, Fla., near the state’s border with Georgia, the scene is relatively tranquil…for now. Smith’s America’s Newsroom colleague Bill Hemmer is down there, and spoke with the city’s mayor Lenny Curry, who told the anchor that there’s a chance 9-1-1 will not be able to answer the calls of residents who did not evacuate.

There’s still time to get out of town.