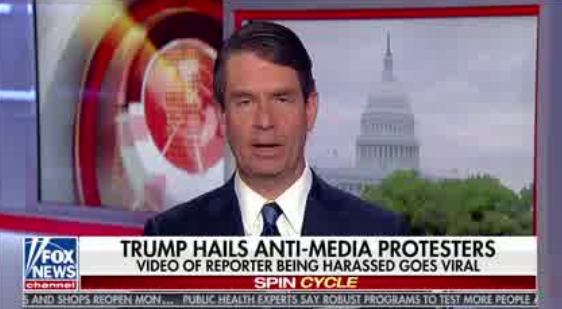 A number of national TV newsers have expressed support for News 12 Long Island reporter Kevin Vesey after video surfaced of him being harassed by protesters on a street in Commack, N.Y. The protesters, part of a local conservative group that supports President Trump, were there to protest New York Gov. Andrew Cuomo’s stay-at-home guidelines. They were yelling phrases like “fake news is not essential,” and referring to the reporter as a “traitor” to his face.

Vesey was only there to do his job, “to tell THEIR story,” he said.

This was my story that aired on TV today—a recap of yesterday’s events, and what’s happened since. pic.twitter.com/cfGrBYiLGJ

“I send my support in regard for Kevin Vesey for going out there. He went by himself, he had no cameraman, he was shooting with his cellphone, a reality of this time, and he was there to tell their story, and they harassed him. They really missed their opportunity with a guy that was there to be fair. I’m not sure the president tweeting supporting them is a right move here. I’ve been in the reporter role when I’ve been out there back during the anti-war protesters during the Bush and Obama years and we’re telling your story, let us do it without being harassed.”

President Trump later shared the video on Twitter of the rowdy crowd yelling at the reporter, and unfortunately remarked, “People can’t get enough of this. Great people!”

Vesey took it in stride.