NEXT:Friday, June 19 Scoreboard: Tucker Carlson Was No. 1 on All of TV, CNN Won Dayside Demo, MSNBC Beat CNN in Total Viewers
PREVIOUS:Saturday, June 20 Scoreboard: It Was a Record-Setting Saturday Night for Fox News 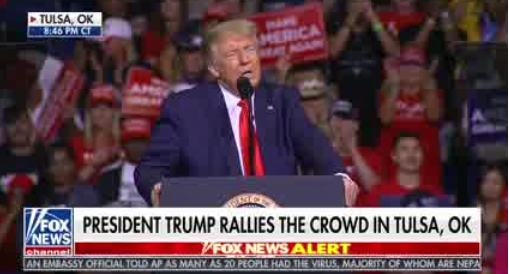 The Bank of Oklahoma Center may have had a surprising number of unoccupied blue seats during Saturday night’s campaign rally. That said, President Trump still managed to draw a massive television audience for the festivities.

According to the most up-to-date data from Nielsen, on Saturday, June 20 from 8-10 p.m. ET, which is when FNC presented live coverage of the rally in Tulsa, Okla., the network averaged 7.66 million total viewers and 1,54 million adults 25-54. That’s easily the largest audience for any TV show over the weekend, and it lifted Fox News to the status of No. 1 network on all television for the weekend. That’s No. 1 across broadcast and cable.