NEXT:Matt Lauer Calls Rape Allegation 'Categorically False,' Says 'My Silence Has Been a Mistake'
PREVIOUS:CNN's Clarissa Ward Is in Syria Reporting on First Wave of Turkish Strikes Against Kurds 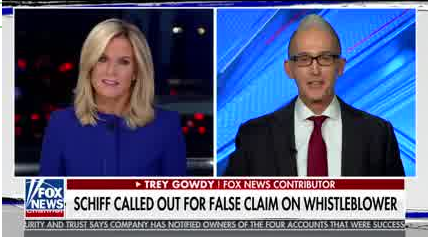 Former South Carolina congressman and Fox News contributor Trey Gowdy has been named outside counsel to President Trump as the impeachment inquiry ramps up.

The AP was first to report that Gowdy was joining the Trump legal team, a report later confirmed by Fox News.

FNC has decided to part ways with Gowdy as a result of this move.

“Trey Gowdy has been terminated and is no longer a contributor,” a Fox News spokesperson confirmed to TVNewser.

The Daily Beast was first to report Gowdy’s departure from the network.

A Fox News spokesperson says Trey Gowdy “has been terminated and is no longer a contributor.”

Per a TVNewser search on the broadcast media search engine TVEyes, Gowdy’s most recent appearance as Fox News contributor was Friday, Oct. 4 on The Story with Martha MacCallum.

A the former congressman from South Carolina’s 4th congressional district, Gowdy is perhaps best known for being chairman of the House Oversight and Reform Committee while the Republicans owned the House majority.  Gowdy was involved in the Benghazi and Russian investigations.