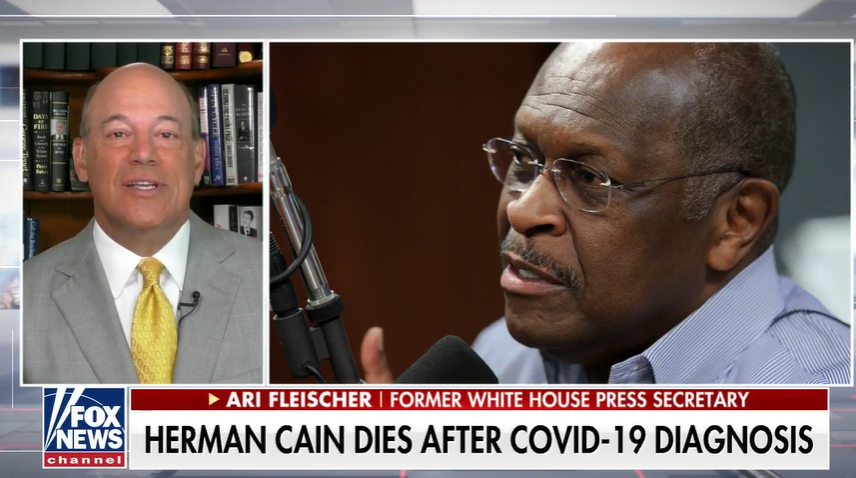 Former Republican presidential candidate, businessman and Fox News contributor Herman Cain has died at the age of 74 after contracting the coronavirus.

“He’s one of the nicest guys I ever met. He just had this affability, this kindness, this hearty big laugh about him,” said former White House press secretary Ari Fleischer to Fox News anchor Trace Gallagher on Thursday. “I mean he lit up rooms where he was. He’s just an enchanting man.”

Fleischer, a Fox News contributor, then issued a warning to viewers: Take the coronavirus seriously.

“This virus, especially if you are elderly, if you have underlying conditions, it can kill you, and so people need to wear their mask,” Fleischer said. “They just need to do the sensible things. We need to be smart.”

Neil Cavuto was another TV newser who provided an on-air reaction to Cain’s death:

Cain’s death has prompted pundits and anchors to publicly speculate whether he caught the virus at President Trump’s Tulsa rally in June, considering he was there without a mask on. Cain, the co-chairman of Black Voices for Trump, attended the rally less than two weeks before receiving his diagnosis. He had been hospitalized in Atlanta on July 1, two days after being told he had tested positive for Covid-19,

Fox News White House correspondent John Roberts pushed back against speculation that Cain caught the virus at the rally, and claimed everyone in attendance who was going to be near the president had been tested beforehand.

The White House offered its condolences to Cain’s loved ones.

Our hearts grieve for his loved ones, and they will remain in our prayers at this time. We will never forget his legacy of grace, patriotism, and faith.