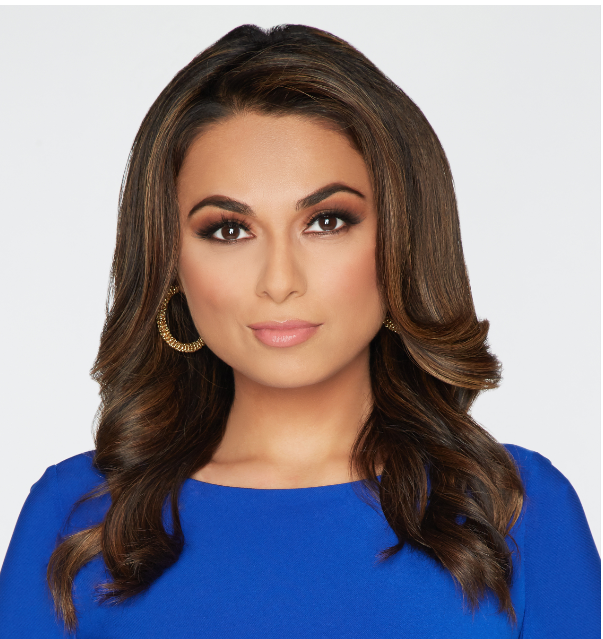 Aishah Hasnie is still unpacking boxes in her new Washington apartment after starting her new role as Fox News congressional correspondent about a week ago. However, she’s not your typical correspondent covering Capitol Hill. The Pakistani-American who grew up in Southern Indiana went on Fox last week, and informed her on-air colleagues and viewers that three of her friends have family members who are struggling mightily in Afghanistan right now, and how time is not on their side.

“I have three good friends, each of their families are in hiding right now, essentially as they put it, ‘waiting on their death sentence,'” Hasnie said last Thursday on America Reports.

Hasnie updated TVNewser on the status of these relatives, and what they’re experiencing on the ground. She also spoke about her own journey from local news in Illinois and Indiana to one of the most visible on-air jobs in Fox’s news division. She grew up a Muslim in a predominately white Indiana town, described how her upbringing and faith inform her life off-air, and whether it has posed any challenges as she moves up the professional ladder.

“I am a deeply faithful person. I’m Muslim, and I pray five times a day,” Hasnie told TVNewser. “My prayers are often around: ‘God, what do you want me to do with this role?’ ‘What am I supposed to do?’ ‘How am I supposed to help people?'”

TVNewser: First, can you share when the last time you spoke with your friends who have family in Afghanistan. Are their families safe?

Hasnie: I spoke with one of my friends just right before our call. He’s got two brothers in Afghanistan. They’re both SIV [Special Immigrant Visa] applicants. One brother is in Kabul, trying desperately to get out. We were just talking about what to advise him because he keeps calling, wondering “what should I do? Should I stay in my house? Should I wait for the embassy to call me? Or should I just go for it, risk it all, and go to the airport and see what happens?” Because that’s the risk. He’s got four young kids and a wife. We were just discussing that and just going over all the information we have so far, from my sources, from reporters that work at Fox. Time is running out. We keep talking about this Aug. 31 deadline, but evacuations would likely stop a few days before that. It’s a concern.

I talked to another friend just yesterday, she’s got family in Kabul. She’s the girlfriend who had a relative shot to death on the street. She wasn’t even calling on behalf of her family—which she’s obviously very worried for—but she was calling on behalf of another Afghan-American family, a friend of hers who has four sisters in Kabul right now that are of age to be married. Their concern is that the Taliban will eventually find them and marry them off to Taliban fighters. They’re very worried as well.

My third friend I talked to just a few days ago, because she’s trying to put together a demonstration in New York City; just to show solidarity and unity with the Afghan people because she feels like she can’t do anything to help her family. Her family is in the Kandahar Province, which is quite a ways from Kabul. I mean truly, and I hate to put it this way, but if you’re not in Kabul right now, you have a very slim chance of escaping. It’s very difficult to travel. The Taliban have essentially taken over the highways. Her father’s entire family is there, and several relatives got into a car a week before Kabul fell and tried to cross into Tajikistan, which is to the northeast, and were stopped at a checkpoint and told to turnaround. They’ve essentially given up. They’ve given up all hope of escaping, they sort of accepted their fate that this is the world they’re going to live in.

*UPDATE: Between the time of our conversation and publication time, Hasnie reported on Neil Cavuto‘s FBN program: “Some relief right now for myself and my friends as we just found out moments ago that their family members are alive. My good friend, a former translator for the U.S. Military in Afghanistan, his brother is with his family, his wife and four very young kids, one-year-old, two-year-old in the family, they were at the [Kabul] airport and for the last two hours we could not get in touch with them. We didn’t know where they were. We didn’t know if they were okay. That was a really, a really stressful period of time for him and for myself. We just made contact with them. We know they are alive and they are safe and they are on their way back now, back to their apartments.”

Having been born in that part of the world and having relatives or friends still there, what, if anything, should Congress do about this? Or is this totally on the White House?

That’s not for me to say. I think that obviously, we’ve got different branches of government that do different things. As a congressional correspondent, it’s going to be my job, primarily, to report on what Congress says, because Congress is one of the most vital jobs. A vital role Congress plays is in oversight, and my job is oversight. I must keep members honest, show the American people who’s doing what, how much of it is just political theater, how much of it is really impacting people’s lives? I’m asking questions about—“When do you plan to have hearings?” “What questions are you asking?” “Were there clear red flags that were ignored by the administration?” I think those are questions that Americans are wondering.

I can’t tell you who should have done what, but I can ask the best questions I can to get as many answers as I can for the American people.

You started a new role at Fox as congressional correspondent only a couple weeks ago, if I recall correctly …

Literally, one week ago. I have been in D.C. for 10 days, and on any given night, I’m either on the phone with my Afghan contacts, I’m reading the latest articles on infrastructure, trying to unpack my kitchen, there are boxes all over the place. I don’t even have internet yet! Absolute insanity. But it’s necessary, right? I’m so grateful for this position and that Fox would offer it to me. And I think—I was telling somebody the other day, I feel like I’m in a unique position, because of my background, and because of the context that I have. I’m able to share the human emotional element of this story with our viewers.

I want to hop back in time a little bit and hear about your transition from local news to Fox News in 2019. What was that transition like for you?

When I was in Indiana, I was there as an investigative reporter. I’ve been an investigative reporter every market I’ve been in. We covered a lot of—you know, your usual suspects … “Potholes all over the place, what’s the mayor going to do about that?” “Crime is rising, what’s the mayor going to do about that?” Things like that. But also, pieces that were able to change law. I did a report on voyeurism law. There was a loophole in the law that wasn’t updated with the times. Essentially, if someone was being a voyeur in a public place, as opposed to a private place, according to the code, then they wouldn’t be able to be prosecuted. So, we had to update that. People were using cellphones in malls, in public places and things like that. They were taking up-skirt pictures and prosecutors couldn’t move forward with those incidents. I was able to get that law changed.

Then, I come to New York, and I’m on the overnight desk, covering the G7 Summit, bilateral meetings, President Trump’s trip to India and all sorts of things, which is exhilarating. It’s a lot of pressure, but also thrilling, because these are things that really transform national and international policy. These are things that really have a much more impact on a wider scale.

I wanted a job where I was challenged and surprised every single day, and that’s exactly what Fox has given me.

You have dual citizenship—U.S. and Pakistan. I don’t think there are many journalists of Pakistani descent working in America. What are some specific obstacles you’ve had to overcome to get where you are right now?

I’m actually really glad you asked me that because I obviously grew up in Indiana. I came to the states when I was 6. I grew up in southern Indiana in a predominantly white town. I was the only Muslim. Not very many other minority families at all, and that’s where I went through 9/11.

I never ever felt like a minority growing up. I was never made to feel like one. I was always included in everything. I played soccer in high school growing up, both my brother and sister did as well. We were always welcomed, and I have literally no complaints. And maybe I’m a unique case. I know that other people have suffered racism and discrimination. I never did.

Getting into TV, I never experienced a moment or even a thought where I thought, “OK, I didn’t get that job. I didn’t get that interview because of the way I look.” I really do feel like everything I’ve earned has been earned based on just how ridiculously persistent I am, and how hard I work. I am always willing to do more.

I’ve just been grateful for the mentors I’ve had in this industry, and it’s really because of them that I’ve become this successful. I also have family that are journalists, so it kind of runs in my blood.

Who is one journalist or one mentor who’s given you some awesome advice along the way, and what was that advice?

I have several mentors, including [ABC News Live and World News Tonight Weekend anchor] Linsey Davis. But the mentor who really changed who I am as a journalist and mostly as a human is Fanchon Stinger. She is the main anchor at Fox59, and she was main anchor when I was there.

I was obsessed with climbing the ladder, and trying to get to the next market and eventually wanted to be foreign correspondent. She taught me that everything we do, every job we have every relationship we make, is less about advancing your career and more about teaching you who you are, and who you are as a person.

At the end of the day, I’m so grateful for wherever my career takes me. But my career is not everything. I could walk away from it tomorrow. I know who I am, I know the skills that I have. Those aren’t owned by anybody. Not Fox, not any media company I’ve ever worked for. I can take them and do with them whatever I want, and I think that knowing that really sets you apart.