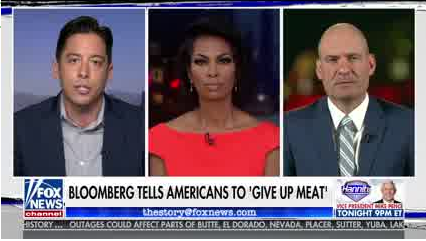 A discussion about “meatless diets” on last night’s edition of The Story with Martha MacCallum turned ugly quickly when Michael Knowles, a podcast host and a writer for the conservative website Daily Wire, referred to 16-year-old climate activist Greta Thunberg live and on-air as a “mentally ill child.”

Substitute host Harris Faulkner did not interject when Knowles made the remark in real-time. However, Fox News wasn’t impressed and made that clear after the broadcast.

“The comment made by Michael Knowles who was a guest on The Story tonight was disgraceful – we apologize to Greta Thunberg and to our viewers.” Fox News told TVNewser in a statement.

The network also confirmed they have no plans to book Knowles going forward.

As mentioned, the discussion was supposed revolve around a Bloomberg editorial published Sunday suggesting that Americans go meatless for at least one day. Knowles, not a fan of the editorial, cited a study on the impact of meatless diets, boldly claiming “They increase emissions, the increased energy use, water use, but none of that matters because the climate hysteria movement is not about science.”

Knowles then went when after the 16-year-old climate activist herself, adding “If it were about science, it would be led by scientists rather than by politicians and a mentally ill Swedish child who is being exploited her parents and by the international left.”

Fellow guest and Democrat Chris Hahn remarked “how dare you” as Knowles continued by claiming this is a “political movement and a religious movement” on the left, to which Hahn responded, “You’re a grown man and you’re attacking a child. Shame on you.”

Thunberg has Asperger’s Syndrome. So, not only was Knowles’ remark gross, but it was also factually inaccurate. Having Asperger’s doesn’t make one mentally ill.

Additionally, Thunberg and her family have publicly stated that the disease has sparked her activism.

Thunberg was the driving force behind last Friday’s climate strike which drew millions to the streets across the globe, and also spoke at the U.N. yesterday, accusing world leaders of failing her generation during what was quite a passionate address to kick off the U.N. Climate Action Summit.

Her mother wrote a book about her mental issues. There is nothing shameful about living with mental disorders.

What is shameful is exploiting a child—particularly a child with mental disorders—to advance your political agenda. https://t.co/oNR6iw7mRF