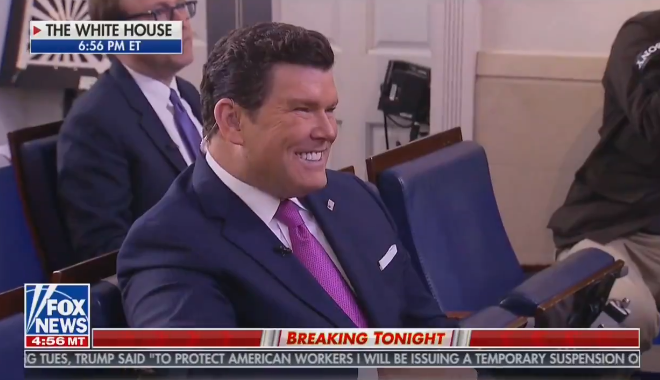 Coming to you from the White House Briefing Room—join us 6pmET on @foxnews! #specialreport #foxnews pic.twitter.com/GKU7CjvNvk

Baier was Fox News’ White House correspondent beginning in 2007, covering the final two years of the George W. Bush administration. He took over for Brit Hume as anchor of Special Report at the start of 2009, where he has remained ever since.

Props to C-SPAN comms chief Howard Mortman for this one:

Why exactly was he there? These briefings have been taking place during Baier’s usual 6 p.m. hour, so the moves gave the Fox Newsman an opportunity to regain some of his daily on-air time. Also, unlike his colleagues on the opinion side, Baier has had a tough time getting the president on his program. Today’s briefing might be his best opportunity to ask the questions he wants answered.

We’ll update this post if Baier takes a seat and starts asking questions during the briefing.

Baier got a number of questions in. We counted six, including the follow-ups.

He asked Pres. Trump when he planned to sign the executive order suspending immigration.

Baier followed up by asking if there will be exemptions in the order. Trump responded by saying “there will be certain exemptions, but we’ll notify you tomorrow, it’s being drawn now and tonight … we have to have it.”

Baier got a second follow-up: “For people who say: ‘It doesn’t track with opening up the country to shut down immigration across the board; for companies and the pipeline that’s already put in place.’ What do you say to them?”

Trump’s response: “Well I think it really does. I think it’s really strong, obviously. It’s country-wide, not specifically like China or some of the other ones that I’ve shut down. You’re going to see a very accurate definition tomorrow.”

Baier then asked Pres. Trump if he could provide an update on the status of North Korean dictator Kim Jong-Un.

Trump said he could not, but that he wished him well.

“These are reports that came out, and we don’t know. We don’t know. I have a very good relationship with him. I can only say this: I wish him well, because if he is in the kind of condition that the reports say, that’s a very serious condition, as you know. But I wish him well. We’ve had a good relationship. I’ve said it many times: If somebody else were in this position, we would have been at war with North Korea, and we’re nowhere close to war … they came out with serious medical reports, but nobody’s confirmed that.

Trump then decided to take a shot at CNN. “It was CNN that came out with the report. When CNN comes out with a report, I don’t place too much credence in it.”

Baier later asked Pres. Trump: “You said about the small business program that Harvard’s going to pay [$9 million in stimulus] back. How confident are you that you can claw the money back?”

Trump responded, “I want Harvard to pay the money back. If they won’t do it, we won’t do something else. … This is meant for workers. This isn’t meant for … the richest institutions in the world.”

Baier asked Dr. Birx to address the CDC director’s recent remark that there could be a second wave of Covid-19 coming this fall, and how it could be worse because it’s timed with the seasonal flu.

At the end of the briefing, Pres. Trump said having Baier in the front row was “an honor,” and added, “I use his [time] slot a lot,” he said of Baier’s 6 p.m. Fox News hour.

The briefing concluded. Baier then stood up and started hosting Special Report right from the briefing room.