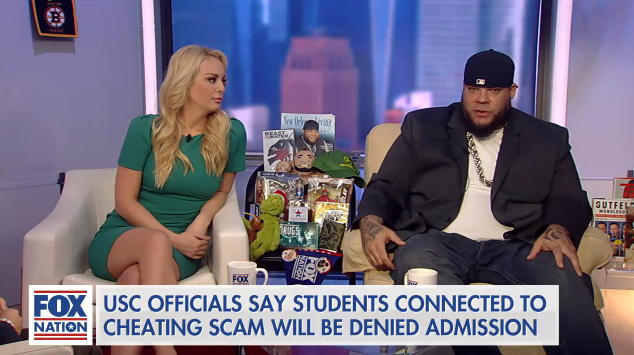 According to Vanity Fair‘s Diana Falzone, a former Fox News entertainment reporter who has a very complicated history with the network, the lawsuit also includes Fox Entertainment Group, News Corp., and several high-level staffers, including Fox Nation and Fox executive producer Jennifer Rauchet, evp of development John Finley, and svp of human resources Monica Mekeel as defendants, among others.

For those unfamiliar with the story, Tyrus allegedly sent McHenry numerous unwanted, lewd texts from October to December of 2018.

In her suit, McHenry says Murdoch’s inappropriate behavior began shortly after their first meeting in August 2018 at a dinner hosted by the network. McHenry and Murdoch were slated to cohost Un-PC, which would launch in November 2018. In October 2018, according to the suit, Murdoch began sending McHenry sexually charged text messages. “I love pony tails and braids you look amazing and itʼs a real turn on not that you care but I love it,” one read, according to the lawsuit. Another read, “I’ll show you what it mean to be bad Britt Mc Henry”//Dick pic coming in 5 sec!!!!” Murdoch allegedly sent the following messages over the course of two months: “I love your legs”//“Fuck them your beautiful I love that picture”//“Is it creepy how I look at you ???”//“FYI you’ll need those legs to escape from me in Montana”//“I please especially on your knees hotness”//“I love the fact your always working if we ever had sex I feel like after an orgazzum you say speaking of feeling good did see the story on the puppy rescue we should do a segment on it hand me my phone.”

Fox News has responded to the news of McHenry’s lawsuit with the following statement: “Ms. McHenry’s lawsuit recycles the same allegations she filed with the New York State Division of Human Rights in October, to which we filed a response on Friday. As we have previously stated, Ms. McHenry’s allegations have been fully investigated and we are confident our actions will be deemed entirely appropriate in litigation. We expect all of her claims to be dismissed.”

McHenry’s lawsuit is being filed after 2 previous outside investigations into the matter.

Back in July 2019, HuffPo  reported that Tyrus had been sending McHenry unsolicited texts with sexual comments. HuffPo’s report came roughly a month after The Daily Beast reported that Tyrus was taken off Un-PC, after McHenry complained to Fox News about him.

The network went on to release a statement after the July HuffPo report, saying that the situation between McHenry and Tyrus “was independently investigated and we consider the matter resolved.”

“While we are not at liberty to discuss the details of any employee matter. We follow strict protocols when matters such as these are brought to our attention, and we make no exceptions,” Fox News said at the time. “The process works because of the extensive systems and measures we have instituted. This situation was independently investigated and we consider the matter resolved. We respect the confidentiality of all involved.”

In the fall, Fox News conducted a second outside investigation into sexual harassment claims McHenry made against Tyrus.

On Nov. 1, the network put out the following statement: “This matter has been fully investigated independently by two outside investigators who have exhausted every resource and avenue in doing so. We stand by our processes and the conclusions of those impartial reviews. We recognize Britt’s right to tell her side of the story and will defend in litigation our actions, which have been evidence-based and wholly appropriate.”

McHenry claims that Fox News responded to her previous sexual harassment complaints against Tyrus by “refusing to investigate some of her claims, shunning her, shutting her out of company events, and refusing to allow her on Fox News Channel shows. … When Ms. McHenry complained to Fox News Human Resources and management, Fox News asked what Ms. McHenry did to provoke her harasser.”

She now wants a trial by jury.

There is documentation to prove everything I have claimed. I look forward to my day in court.

I am standing up for myself, for women and for what’s right. I have maintained the same allegations because the truth doesn’t change. I feel for any sexual harassment victim who has their story and evidence dismissed, doubted and not believed.